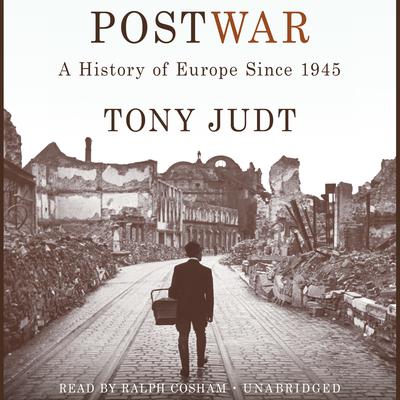 Postwar: A History of Europe Since 1945

A Guardian Pick of Best Books of the 21st Century

A SoundCommentary.com’s The Best of the Best in Audio

Almost a decade in the making, this much-anticipated grand history of postwar Europe from one of the world’s most esteemed historians and intellectuals is a singular achievement. Postwar is the first modern history that covers all of Europe, both east and west, drawing on research in six languages to sweep readers through thirty-four nations and sixty years of political and cultural change—all in one integrated, enthralling narrative. The book incorporates international relations, domestic politics, ideas, social change, economic development, and culture—high and low. Every country has its chance to play the lead, and although the big themes are superbly handled—including the cold war, the love/hate relationship with America, cultural and economic malaise and rebirth, and the myth and reality of unification—none of them is allowed to overshadow the rich pageant that is the whole. Vividly and clearly written for the general reader, witty, opinionated, and full of fresh and surprising stories and asides, Postwar is a movable feast for lovers of history and lovers of Europe alike.

Both intellectually ambitious and compelling to read, thrilling in its scope and delightful in its small details, Postwar is a rare joy.

“Remarkable…The writing is vivid; the coverage—of little countries as well as of great ones—is virtually superhuman.” —New Yorker
“A book that has the pace of a thriller and the scope of an encyclopedia…A very considerable achievement…Brilliant.” —New York Review of Books
“Massive, kaleidoscopic, and thoroughly readable…[Judt’s] book now becomes the definitive account of Europe’s rise from the ashes and its takeoff into an uncertain future.” —Time
“Nobody is more qualified than Judt to combine serious descriptive history with incisive, original political analysis, to cover both Western and Eastern Europe, and to pass stinging yet informed judgments on the behavior and evasions, the deeds and the failings, of his subjects…This monumental work is a tour de force.” —Foreign Affairs
“A riveting and totally involving listening experience as narrated by Ralph Cosham. The sheer variety of languages and place names demand the most experienced and very best of readers and Cosham, a former journalist and stage and screen actor, is more than up to this task…Cosham’s masterful reading makes this accessible to many who might find reading the nearly 850 pages intimidating or overwhelming. For anyone who listens, especially those who have lived through much of this, Postwar will be eye-opening.” —SoundCommentary.com (starred review)
“This is the best history we have of Europe in the postwar period and not likely to be surpassed for many years…Here [Judt] combines deep knowledge with a sharply honed style and an eye for the expressive detail…This is history writing at its very best.” —Publishers Weekly (starred review)
“Few listeners can hope to absorb all the complex maneuverings, but…the task becomes more palatable with the voice of narrator Ralph Cosham. His smooth facility with the spoken word and linguistic nuance keeps one moving forward. He also rises to the author’s verbal complexity, in English and in delivery of smatterings of foreign words.” —AudioFile

Tony Judt (1948–2010) was a British historian, essayist, author, editor, and university professor. He specialized in European history, was the Erich Maria Remarque Professor in European Studies at New York University, and director of NYU’s Erich Maria Remarque Institute. He was a frequent contributor to the New York Review of Books, the Times Literary Supplement, the New Republic, the New York Times, and many other journals in Europe and the United States. In 1996 he was elected a fellow of the American Academy of Arts and Sciences and in 2007 a corresponding fellow of the British Academy. His book Postwar: A History of Europe Since 1945 was a finalist for the Pulitzer Prize.