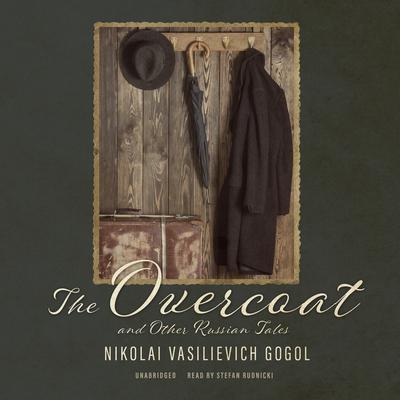 The Overcoat and Other Russian Tales

In this original compilation from Skyboat Media and Blackstone Publishing, Nikolai Gogol’s stories range from the whimsical and bizarre to the incisive and satiric, from the horrific and terrifying to the nonsensical and hilarious.

A lowly government clerk, Akay Akakiyevich, must scrimp and save to purchase a new coat for the cold, Russian winter in “The Overcoat.” But after one night of basking in the warmth of his new coat and the respect of his colleagues, Akaky’s one-of-a-kind overcoat is stolen from him. In his pursuit of justice, Akaky receives no help and is consumed by the loss of his prized possession.

In “The Viy” Gogol recounts a popular folk story in which a monstrous creature, known by the population of Little Russia as the king of gnomes, helps a witch get revenge on a young student who escaped from her trap years before.

“How the Two Ivans Quarrelled” begins as a merry farce, telling the story of the friendship-ending fight between Ivan Ivanovitch and Ivan Nikiforovitch. The two Ivans have been neighbors and best friends for years despite their numerous differences, but this fight infiltrates every facet of their lives, until they cannot stand the sight of one another.

Then finally in “The Nose,” we see the peak of Gogol’s humor and absurdity when a government official wakes to find his nose has disappeared. The Russian critic D.S. Mirsky (1890–1939) described the story as “a piece of sheer play, almost sheer nonsense. In it more than anywhere else Gogol displays his extraordinary magic power of making great comic art out of nothing.” This extraordinary power is woven throughout all the stories in this compilation, and it firmly establishes Gogol as a master of the peculiar and the surreal.