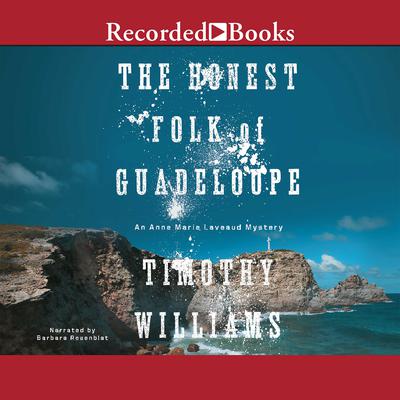 The Honest Folk of Guadeloupe: An Anne Marie Laveaud Mystery

April 1990, Guadeloupe: The body white female French tourist has been discovered on a nudist beach. The victim's remains offer no clues about her final hours. What turned this woman's vacation in paradise into a final nightmare? French-Algerian judge Anne Marie Laveau is assigned the high-profile case as a top priority. As always, the story of a murdered white woman has attracted the attention of international media. The economy of Guadeloupe, so dependent on the tourist industry, could suffer a terrible hit if this case isn't brought under control with some quick, impressive police work.

“[A] close look at the folk of Guadeloupe and the West Indian culture in general, with its mix of races and lingering colonial resentment of Mother France.” —Gumshoe Review
“Fascinating…The Guadelopue of 1990 is no egalitarian paradise. Although the islands that make up the French colonies may be lush and blessed with pristine beaches, they are a racial, cultural, and political quagmire only the brave and nimble-footed can successfully navigate. Fortunately for the hurting souls seeking her help, Anne Marie Laveaud is up to the task.” —Mystery Scene
“As much social commentary as mystery, this is a crackerjack whodunit from start to finish, as well as a compelling look into one of the last bastions of colonialism in a shrinking world.” —BookPage
“Absorbing…laden with insights about the legacies of colonialism, such as nuanced racism, official corruption, and troubled interactions between men and women.” —Publishers Weekly
“Sharp-witted, French-Algerian Anne Marie is an investigator worthy of a following, and Williams has craftily created her story as a microcosm of Guadeloupe’s social situation, where alienation battles dependence and racial stratification rules. Williams digs deep below the exotic setting’s surface in this nuanced mystery.” —Booklist
“An elegantly incisive narrative and a fascinating heroine.” —Kirkus Reviews
“Barbara Rosenblat’s elegant French enunciation and gutsy portrayal of Anne Marie Laveaud make this mystery ever more entertaining…Rosenblat portrays her characters with intriguing verve, adding pizzazz to the plot’s twists and turns. As Laveaud gingerly tiptoes between damaging Guadeloupe’s tourism and getting close to identifying killer’s motives, Rosenblat reveals the strength and courage that are necessary for Laveaud to stay the course.” —AudioFile

Timothy Williams, CWA award-winner, has written five crime novels set in Italy featuring Commissario Piero Trotti. He has also written two novels set in the French Caribbean, Another Sun and The Honest Folk of Guadeloupe. In 2011 the Observer placed him among the ten best modern European crime novelists.  He has lived in the French West Indies, where he teaches, since 1980.