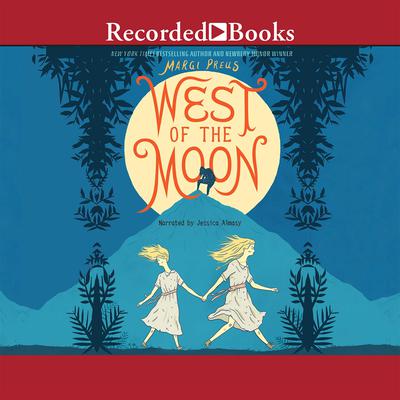 West of the Moon

Publisher Marketing: In "West of the Moon," award-winning and "New York Times" bestselling author Margi Preus expertly weaves original fiction with myth and folktale to tell the story of Astri, a young Norwegian girl desperate to join her father in America. After being separated from her sister and sold to a cruel goat farmer, Astri makes a daring escape. She quickly retrieves her little sister, and, armed with a troll treasure, a book of spells and curses, and a possibly magic hairbrush, they set off for America. With a mysterious companion in tow and the malevolent "goatman" in pursuit, the girls head over the Norwegian mountains, through field and forest, and in and out of folktales and dreams as they steadily make their way east of the sun and west of the moon.

“Astri is like a girl out of a fairy tale, and the native folktales that Preus weaves through the narrative serve as guides, lessons, and inspiration for her.” —Publishers Weekly (starred review)
“Like dun silk shot thought with gold, Preus interweaves the mesmerizing tale of Astri’s treacherous and harrowing mid-nineteenth-century emigration to America with bewitching tales of magic. A fascinating author’s note only adds to the wonder.” —Booklist (starred review)
“At its most basic, this is a tale about a girl escaping a poverty-stricken life in mid-nineteenth century Norway. But from the beginning, the mystical and wondrous elements of Norwegian folktales are woven into the narrative, lending a timeless quality to a story inspired by the author’s family history. The harsh realities of that time period, from rickets to tetanus, take on a strange, magical, and often terrifying aspect, as seen through Astri’s naive eyes…The decisions Astri makes to survive come to haunt her, and with her regret comes a new maturity, strength, and an ability to face her future in America. Enthralling and unflinching, this historical tale resonates with mythical undertones that will linger with readers after the final page is turned.” —School Library Journal (starred review)
“Norwegian history, fiction, and folklore intertwine seamlessly in this lively, fantastical adventure and moving coming-of-age story.” —Kirkus Reviews (starred review)
“Several Norwegian folktales are seamlessly integrated into the fast-paced, lyrically narrated story, which features a protagonist as stalwart and fearless as any fairy-tale hero.” —Horn Book (starred review)
“It’s Astri’s voice, however, that is most appealing: her direct, no-nonsense narration has a sharp bite, yet it also reveals the vulnerable young girl who’s willing to continue to fight but is nonetheless exhausted by the weight of her struggle. The chapters have an episodic structure that makes this an ideal choice for read-aloud or storytelling adaptations, while the mix of folklore, fact, and fantasy will please fans of Edith Patou’s East." —Bulletin of the Center for Children’s Books
“Narrator Jessica Almasy provides a haunting delivery of a story that weaves historical fiction, Scandinavian fairy tales, and a coming-of-age theme. Thirteen-year-old Astri’s life has taken a bad turn: After her father goes to America and her mother dies, her aunt sells her to a cruel, hunchbacked goatherd for two gold coins and a goat’s haunch. Almasy voices the dark undertones of the story. She doesn’t hold back in showing Astri’s complicated character—an unsettling mix of kindness, conniving, and ruthlessness born from the need to survive.” —AudioFile

Margi Preus is a children’s book author and playwright. Her first novel for young people, Heart of a Samurai, was named a 2011 Newbery Honor Book, an ALSC Notable Book, and a recipient of the Asian Pacific American Award for Children’s Literature, among other honors. Her picture books include Celebritrees; Historic and Famous Trees of the World, winner of the 2013 Flicker Tale Award.