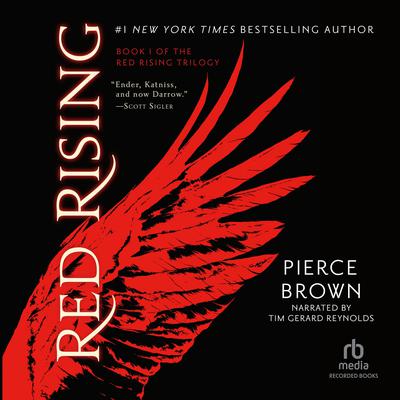 An Entertainment Weekly “Must Read”, January 2014

An Amazon Best Book of the Month, February 2014

One of Audible’s Best Audiobooks of 2014

Ender, Katniss, and now Darrow."-- Scott Sigler Pierce Brown' s relentlessly entertaining debut channels the excitement of The Hunger Games by Suzanne Collins and Ender' s Game by Orson Scott Card. " I live for the dream that my children will be born free," she says. " That they will be what they like. That they will own the land their father gave them." " I live for you," I say sadly. Eo kisses my cheek. " Then you must live for more." Darrow is a Red, a member of the lowest caste in the color-coded society of the future. Like his fellow Reds, he works all day, believing that he and his people are making the surface of Mars livable for future generations. Yet he spends his life willingly, knowing that his blood and sweat will one day result in a better world for his children. But Darrow and his kind have been betrayed. Soon he discovers that humanity reached the surface generations ago. Vast cities and sprawling parks spread across the planet. Darrow-- and Reds like him-- are nothing more than slaves to a decadent ruling class. Inspired by a longing for justice, and driven by the memory of lost love, Darrow sacrifices everything to infiltrate the legendary Institute, a proving ground for the dominant Gold caste, where the next generation of humanity' s overlords struggle for power. He will be forced to compete for his life and the very future of civilization against the best and most brutal of Society' s ruling class. There, he will stop at nothing to bring down his enemies . . . even if it means he has to become one of them to do so.

“Fast-paced, gripping, well-written—the sort of book you cannot put down. I am already on the lookout for the next one.” —Terry Brooks, New York Times bestselling author of The Sword of Shannara
“Ender, Katniss, and now Darrow: Pierce Brown’s empire-crushing debut is a sprawling vision.” —Scott Sigler, New York Times bestselling author of Contagious
“[A] spectacular adventure…one heart-pounding ride…Pierce Brown’s dizzyingly good debut novel evokes The Hunger Games, Lord of the Flies, and Ender’s Game…[Red Rising] has everything it needs to become meteoric.” —Entertainment Weekly
“[Red Rising] will captivate readers and leave them wanting more.” —Library Journal (starred review)
“A Hollywood-ready story with plenty of action and thrills.” —Publishers Weekly
“Narrator Tim Gerard Reynolds’ portrayal of a virtual slave trapped in the life-sucking mines of Mars is top-notch. The story could have been as easily set in a feudal European camp as on the distant red planet. The rugged dignity of the hero, Darrow, who escapes and challenges the universe’s ruling class, is almost Shakespearean.” —AudioFile
“Very ambitious…a natural for Hunger Games fans of all ages.” —Booklist
“A story of vengeance, warfare, and the quest for power…reminiscent of The Hunger Games and Game of Thrones.” —Kirkus Reviews
“An intriguing world in a unique setting…Clever twists and revelations will surprise readers and help keep them engaged.” —RT Book Reviews