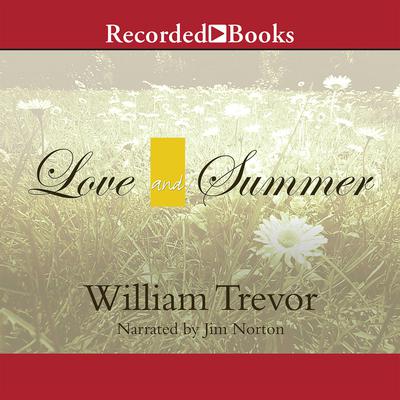 Longlisted for the 2009 Man Booker Prize

An author who has received international critical acclaim for his exquisite prose, William Trevor saw his novel The Story of Lucy Gault short-listed for the prestigious Booker Prize. Love and Summer tells the tale of Ellie Dillahan, an orphan entered into a bleak future with the man she wed. As the story unfolds, Ellie's life is thrown into tumult by a fateful encounter with another man. "What other living writer could so regularly follow his own masterpieces . with another and another?"-New York Times Book Review

“A delicate sort of drama—there is no corpse in the basement, no bomb lies hidden in any drawer—but even so, a reader will have his heart in his mouth for the last fifty pages. And when the heart settles back down, it will be broken and satisfied…A thrilling work of art.” —New York Times Book Review
“When Trevor chooses to leave the inner mind of a character, he lingers on aspects of the physical world, and in this way we live where these people do. He lingers over the way that Miss Connulty prepares food for her overnight lodgers. He lingers on Ellie’s own domestic duties, and on the dogs that are part of the Dillahan farm. He lingers on the moments that tell us the summer is moving by. Mostly, and most important, what Trevor does is make us believe and care…This is what we feel in Trevor’s strong, able, and exquisitely gentle storytelling hands.” —Washington Post
“It’s from the subtle yet ferocious specificity of this story that its power rises…The ordinary throughout is presented as instances of paradise just about to be reached. That Trevor allows his characters so much is not only due to the innate generosity for which he is justly worshipped as a writer, but to a new grace again, something further, that marks this book as particular, miraculous; in it old matters are made new, transformed, redeemed.” —Guardian (London)
“Masterful…His prose precisely nuanced and restrained, Trevor depicts a society beginning to loosen itself from the Church’s implacable condemnation of sexual immorality.” —Publishers Weekly (starred review)
“Jim Norton captures the ache and longing that permeate William Trevor’s marvelous new novel…Trevor has written a timeless tale of love found, lost, and perhaps found again. Set in rural Ireland among farmers of few words and watchful shopkeepers, the story is sharp, sweet, and painfully perceptive. Norton uses just enough vocal variations for us to keep the characters straight and narrates in an accent subtly influenced by the Emerald Isle. His tone, at once gentle and solemn, would suit the recitation of a myth, which of course, this is.” —AudioFile
“Trevor…matches an exquisite but never precious prose style with wise psychological understanding of the fluster beneath the surface of ordinary lives…Extraordinary.” —Booklist
“Trevor’s latest is rich in dazzling imagery, especially variations on light, illumination, and reflection, and unforgettable character…Another masterly work from one of our greatest contemporary novelists.” —Library Journal
“The poignancy of life worn down at the elbows, Trevor’s signature note, gently animates another masterpiece…An archetypal Irish love story and a perfect novel—sweet, desperate, sad, unforgettable.” —Kirkus Reviews (starred reviews)

William Trevor is the author of nearly thirty books, including Felicia’s Journey, which won the Whitbread Book of the Year Award and was made into a major motion picture. In 1996 he was the recipient of the Lannan Award for Fiction, and in 2001 he won the Irish Times Literature Prize for Fiction. Two of his books were chosen by the New York Times as best books of the year, and his short stories appear regularly in the New Yorker. In 1997 he was named Honorary Commander of the British Empire. He lives in Devon, England.