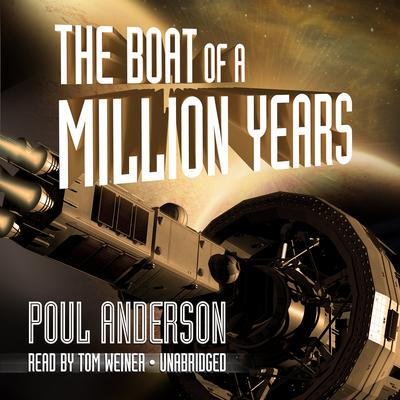 The Boat of a Million Years

Finalist for the 1990 Hugo Award for Best Novel

Nominated for the 1989 Nebula Award for Best Novel

Nominated for the 1990 Prometheus Hall of Fame Award

Others have written science fiction on the theme of immortality, but in The Boat of a Million Years, Poul Anderson made it his own. Early in human history, certain individuals were born who live on—unaging, undying—through the centuries and millennia. This story follows them over two thousand years, up to our time and beyond—to the promise of utopia and to the challenge of the stars.

As time goes on, these unique individuals must learn to cope with—and hide—their true nature. Facing suspicion by the mortals around them, they become wanderers, disconnected even from their families. But hope lies ahead.

A milestone in modern science fiction and a New York Times Notable Book when first published in 1989, this is one of a great writer’s finest works.

“Succeeds admirably.” —New York Times
“Anderson brings proven storytelling abilities and research skills to chronicles that range from 310 BC to a centuries-distant future.” —Publishers Weekly
“Ambitious in scope, meticulous in detail, polished in style.” —Library Journal
“An unforgettable novel, with a cast as big as mankind and an adventure that charts the course of time. Read it, enjoy it, savor it.” —Jerry Pournelle, multiple award–winning science fiction author
“This is the book we’ve all been waiting for!” —Joe Haldeman, author of The Forever War