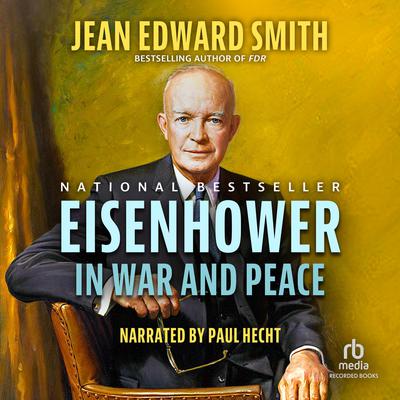 Eisenhower in War and Peace

Author of the best-seller FDR, Jean Edward Smith is a master of the presidential biography. Setting his sights on Dwight D. Eisenhower, Smith delivers a rich account of Eisenhower's life using previously untapped primary sources. From the military service in WWII that launched his career to the shrewd political decisions that kept America out of wars with the Soviet Union and China, Smith reveals a man who never faltered in his dedication to serving America, whether in times of war or peace.

“Magisterial.” —New York Times
“Always engrossing…Smith describes a man who commanded the largest coalition army in history without grandiloquent posturing…leaving office more popular than any successor…Smith portrays a genuinely admirable Eisenhower: smart, congenial, unpretentious, and no ideologue. Despite competing biographies from Ambrose, Perret, and D’Este, this is the best.” —Publishers Weekly (starred review)
“Smith, America’s greatest living biographer, demonstrates why, now more than ever, Americans should like Ike.” —George F. Will
“Jean Smith, indubitably America’s most distinguished biographer, has now produced the classic life of Dwight Eisenhower. Ike, who rose from an anti-military and non-elite background, resides in the ranks of the greatest war heroes of history, not to speak of his place as a leader of post–Second World War peace. Here he comes alive on every page—the beneficiary of the exhausting fresh research this handsomely written book is based upon. When the General died, Mamie, his lifelong wife, allowed that she never fully knew her famous husband. No reader of Smith’s work will render the same complaint.” —Henry F. Graff, professor emeritus of history, Columbia University