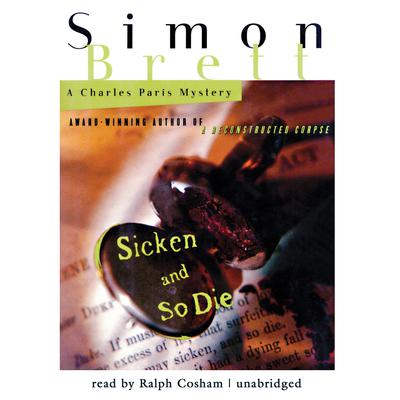 Sicken and So Die

Simon Brett's oldest and most beloved character, Charles Paris, is back. Paris, the often out-of-work actor, has a good part, for a change, playing Sir Toby Belch in a summer festival production of Twelfth Night. But when the director takes ill and then Paris' friend in the production is the apparent victim of intentional food poisoning meant for Paris, it's not long until the bodies start to turn up. Paris is forced to deal not only with a wild young director whose idea of Shakespeare the bard himself would hate, but with a murderer in the production as well.

“For followers of this series, this is classic Charles Paris.”  —Publishers Weekly
“Funny and stylish.”   —Amazon.com, editorial review
“The lugubrious but quick-witted Paris is in rollicking good form in this thoroughly delightful romp. A must for actor wanna-bes, mystery buffs, and Shakespeare fans.” —Booklist
“Thespians and fans of Brett will appreciate this work.”  —Library Journal