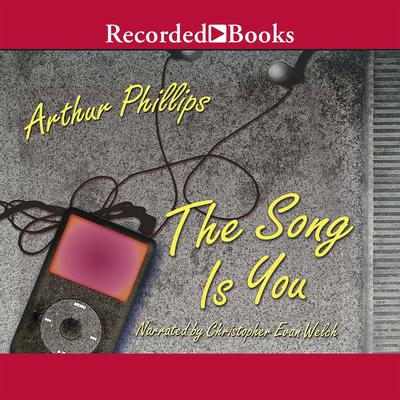 The Song Is You

Each song on Julian's iPod, "that greatest of all human inventions," is a touchstone. There are songs for the girls from when he was single, there's the one for the day he met his wife-to-be, there's one for the day his son was born. But when Julian's family falls apart, even music loses its hold on him. Until one snowy night in Brooklyn, when his life's soundtrack-and life itself-start to play again. Julian stumbles into a bar and sees Cait O'Dwyer, a flame-haired Irish rock singer, performing with her band, and a strange and unlikely love affair is ignited. Over the next few months, Julian and Cait's passion plays out, though they never meet. What follows is a heartbreaking dark comedy, the tenderest of love stories, and a perfectly observed tale of the way we live now.

“If novelists were labeled zoologically, Arthur Phillips would fall naturally into the dolphin family: his writing is playful, cerebral, likable, wide-ranging, and inventive…His maniacally brainy (brainiacal?) narrative voice seems to have been steeped in and tempered by the romance of all the songs that permeate the story, songs both embedded and overt, real and invented. A less rigorous writer might have turned this story into a sentimental, overwritten swamp. But thanks to Phillips’ thwarting of our (and his characters’) expectations, and to his objective, amused intelligence about the deep ways music affects us, he dances like Fred Astaire over any alligators and mangrove roots lurking in turgid waters…The whole novel zings with fresh insight and inspired writing…Impossible to put down.” —New York Times Book Review (Editor’s Choice)
“An ambitious story of love and obsession wrapped in our current addiction to techno gadgets…The Song Is You showcases Phillips’ gift for plumbing the depths of grief and emotional fragility. His love of music, including the profound song lyrics he creates for Cait, is a delight…A writer of enormous talent.” —USA Today
“Phillips’ best writing achieves an elaborate, gratifying precison, combining a naturally flamboyant style with neat, observational wit. This quality is sharpest in some of the character portraits and set pieces that animate this novel…[A] beautiful evocation of music’s consoling power to blur the borders between art, artist, and consumer.” —New Yorker
“Someone had to do it, write the great American iPod novel, and we’re lucky that it is someone with talent…Arthur Phillips is one subtle writer. I think that he’s dealing quietly with big themes such as illusion versus reality…and also offers wonderfully satirical moments on making commercials, failing rock stars, playing Jeopardy!, and some piercing, painful moments on what it’s like to be aging in youth culture and some extraordinary takes on contemporary sexual mores…He also writes extraordinarily well about grief.” —Chicago Tribune
“Phillips naviagates an ostensibly arid present that turns out to be richly human, filled with unexpected grace…Phillip’s descriptions of his characters are filled with startling intensity.” —Washington Post (Critic’s Choice)
“Playful…The Song Is You takes on loneliness, alienation, middle age, and what it means to feel passé and weighted down by your past…Yet despite these sober concerns, Phillips’ sparkling prose makes for a seriously fun read.” —San Francisco Chronicle
“A betrayed husband’s fascination with a charismatic singer is given several intriguing twists…The novel’s clashing harmonies seduce and fascinate. And Phillips still looks like the best American novelist to have emerged during the present decade.” —Kirkus Reviews