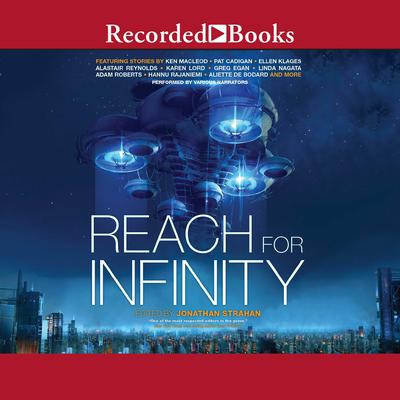 HUMANITY AMONG THE STARS What happens when we reach out into the vastness of space? What hope for us amongst the stars? Multi-award winning editor Jonathan Strahan brings us fourteen new tales of the future, from some of the finest science fiction writers in the field. The fourteen startling stories in this anthology feature the work of Greg Egan, Aliette de Bodard, Ian McDonald, Karl Schroeder, Pat Cadigan, Karen Lord, Ellen Klages, Adam Roberts, Linda Nagata, Hannu Rajaniemi, Kathleen Ann Goonan, Ken MacLeod, Alastair Reynolds and Peter Watts. Author bio: Jonathan Strahan is a multiple award-winning editor and anthologist. He is also the reviews editor of Locus. He lives in Perth, Western Australia with his wife and their two daughters. He has previously edited two SF anthologies: Engineering Infinity and Edge of Infinity, and he also publishes the celebrated fantasy anthology series Fearsome.

Ken MacLeod is an award-winning science fiction writer. His novels have won the Prometheus Award and the British Science Fiction Association Award and have been nominated for the Hugo and Nebula Awards. He is the author of more than a dozen novels. He graduated from Glasgow University with a degree in zoology and in 2009 was writer in residence at the ESRC Genomics Policy and Research Forum at Edinburgh University.

Jonathan Strahan is the editor of more than forty books, including the Locus and Aurealis award–winning anthologies The Starry Rift, Life on Mars, The New Space Opera (Vols. 1 & 2), the bestselling The Locus Awards (with Charles N. Brown), and the Eclipse and the Best Science Fiction and Fantasy of the Year anthology series. He won the World Fantasy Award for his editing in 2010 and has been nominated four times for the Hugo Award for editing. He has also won the Aurealis Award three times, the Ditmar Award five times, and is a recipient of the William Atheling Award for his criticism and review. He has been the reviews editor for Locus: The Magazine of the Science Fiction and Fantasy Field since 2002.

Ian McDonald is the author of highly acclaimed science fiction novels. He has been a three-time winner of the British Science Fiction Association Award and has won the Locus Award, the Theodore Sturgeon Award, the John W. Campbell Memorial Award, and others. His book Time Was was a finalist for the 2019 Philip K. Dick Award for distinguished science fiction.

Greg Egan is a computer programmer and the author of the acclaimed science fiction novels Permutation City, Diaspora, Teranesia, Quarantine, and the Orthogonal trilogy. He has won the Hugo Award as well as the John W. Campbell Memorial Award. Greg’s short fiction has been published in Interzone, Asimov’s, Nature, and elsewhere. He lives in Australia.

Peter Watts is a science fiction writer and a marine-mammal biologist. In addition to a number of accolades for science fiction—including the Aurora, Hugo, and Shirley Jackson Awards—Watts has won minor awards in fields as diverse as marine mammal research and documentary filmmaking. He lives in Toronto.

Karl Schroeder was born in Brandon, Manitoba, and is the second science fiction writer to come out of the small community. He now lives in Toronto with his wife and their daughter.

Ellen Klages is the author of two acclaimed historical novels, The Green Glass Sea, which won the Scott O’Dell Award and the New Mexico Book Award, and White Sands, Red Menace, which won the California and New Mexico Book awards. Her story, “Basement Magic,” won a Nebula Award, and “Wakulla Springs,” co-authored with Andy Duncan, which was nominated for the Nebula, Hugo, and Locus awards, won the World Fantasy Award for Best Novella.