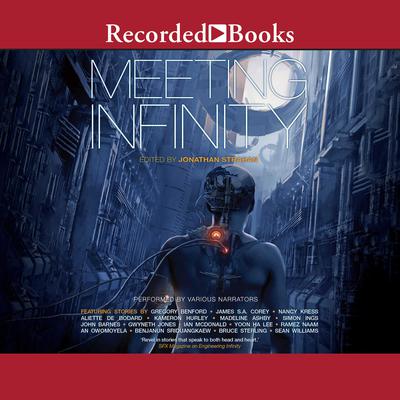 THE FUTURE IS OURSELVES The world is rapidly changing. We surf future-shock every day, as the progress of technology races ever on. Increasingly we are asking: how do we change to live in the world to come? Whether it's climate change, inundated coastlines and drowned cities; the cramped confines of a tin can hurtling through space to the outer reaches of our Solar System; or the rush of being uploaded into cyberspace, our minds and bodies are going to have to drastically alter. Multi-award winning editor Jonathan Strahan brings us another incredible volume in his much praised science-fiction anthology series, featuring stories by Madeline Ashby, John Barnes, James S.A. Corey, Gregory Benford, Benjanun Sriduangkaew, Simon Ings, Kameron Hurley, Nancy Kress, Gwyneth Jones, Yoon Ha Lee, Bruce Sterling, Sean Williams, Aliette de Bodard, Ramez Naam, An Owomoyela and Ian McDonald. Author bio: Jonathan Strahan is an editor and anthologist. He coedited The Year's Best Australian Science Fiction and Fantasy anthology series in 1997 and 1998. He is also the reviews editor of Locus. He lives in Perth, Western Australia, with his wife and their two daughters.

Ken MacLeod is an award-winning science fiction writer. His novels have won the Prometheus Award and the British Science Fiction Association Award and have been nominated for the Hugo and Nebula Awards. He is the author of more than a dozen novels. He graduated from Glasgow University with a degree in zoology and in 2009 was writer in residence at the ESRC Genomics Policy and Research Forum at Edinburgh University.

Ian McDonald is the author of highly acclaimed science fiction novels. He has been a three-time winner of the British Science Fiction Association Award and has won the Locus Award, the Theodore Sturgeon Award, the John W. Campbell Memorial Award, and others. His book Time Was was a finalist for the 2019 Philip K. Dick Award for distinguished science fiction.

Ramez Naam was born in Cairo, Egypt, and came to the US at the age of three. He’s a computer scientist who spent thirteen years at Microsoft, leading teams working on email, web browsing, search, and artificial intelligence. He holds almost twenty patents in those areas. He is the winner of the 2005 H.G. Wells Award for his non-fiction book More Than Human: Embracing the Promise of Biological Enhancement. He has worked as a life guard, has climbed mountains, backpacked through remote corners of China, and ridden his bicycle down hundreds of miles of the Vietnam coast. He lives in Seattle, where he now writes full time.

Adam Roberts is a writer of science fiction novels and stories and serves as professor of nineteenth-century literature in English at Royal Holloway, University of London. His novels Salt, Gradisil, and Yellow Blue Tibia were nominated for the Arthur C. Clarke Award. By Light Alone was shortlisted for the 2012 BSFA Award.

Greg Egan is a computer programmer and the author of the acclaimed science fiction novels Permutation City, Diaspora, Teranesia, Quarantine, and the Orthogonal trilogy. He has won the Hugo Award as well as the John W. Campbell Memorial Award. Greg’s short fiction has been published in Interzone, Asimov’s, Nature, and elsewhere. He lives in Australia.

Ellen Klages is the author of two acclaimed historical novels, The Green Glass Sea, which won the Scott O’Dell Award and the New Mexico Book Award, and White Sands, Red Menace, which won the California and New Mexico Book awards. Her story, “Basement Magic,” won a Nebula Award, and “Wakulla Springs,” co-authored with Andy Duncan, which was nominated for the Nebula, Hugo, and Locus awards, won the World Fantasy Award for Best Novella.