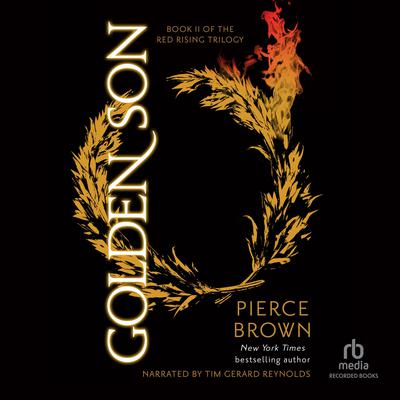 An Amazon Best Book of the Month for January 2015

A LibraryReads Pick for January 2015

With shades of The Hunger Games, Ender's Game, and Game of Thrones, debut author Pierce Brown's genre-defying epic Red Rising hit the ground running and wasted no time becoming a sensation. Golden Son continues the stunning saga of Darrow, a rebel forged by tragedy, battling to lead his oppressed people to freedom from the overlords of a brutal elitist future built on lies. Now fully embedded among the Gold ruling class, Darrow continues his work to bring down Society from within. A life-or-death tale of vengeance with an unforgettable hero at its heart, Golden Son guarantees Pierce Brown's continuing status as one of fiction's most exciting new voices.

“Gripping…Both author and lead character have cranked up the emotional stakes…charging the novel with the kind of dystopia-toppling action you’d expect in a trilogy ender, not a middle volume. On virtually every level, this is a sequel that hates sequels—a perfect fit for a hero who already defies the tropes. Grade A.” —Entertainment Weekly
“Brown writes layered, flawed characters…but plot is his most breathtaking strength…Every action seems to flow into the next.” —NPR
“One of the pleasures of author Pierce Brown’s world building is the juxtaposition of the primitive and high-tech…Brown amps up the tension by putting Darrow into ever greater physical and emotional conflict…Just like Red Rising, the first book in Brown’s, the end of Golden Son has me counting the days until the next (and final) book is released.” —Amazon.com, editorial review
“The stakes are even higher than they were in Red Rising, and the twists and turns of the story are every bit as exciting. The jaw-dropper of an ending will leave readers hungry for the conclusion to Brown’s wholly original, completely thrilling saga.” —Booklist (starred review)
“Narrator Tim Gerard Reynolds gives a masterful performance of a story that ranks among the best in science fiction…Reynolds can snap from smooth urbanity to deep, gritty tones, depending on the circumstance and which of the myriad characters he is voicing. He exudes a confidence acquired by having spent significant time in Darrow’s dangerous world, and his crisp diction ensures that not one moment of conflict is missed. Winner of the AudioFile Earphones Award.” —AudioFile
“Dramatic…the rare middle book that loses almost no momentum as it sets up the final installment.” —Publishers Weekly
“Guaranteed to captivate readers. He cleverly pens a well-crafted adventure, laced with tension and set in a dystopian world with a conflicted, intriguing rebel hero. Golden Son is one fantastic read!” —RT Book Reviews (4½ stars, Top Pick!)