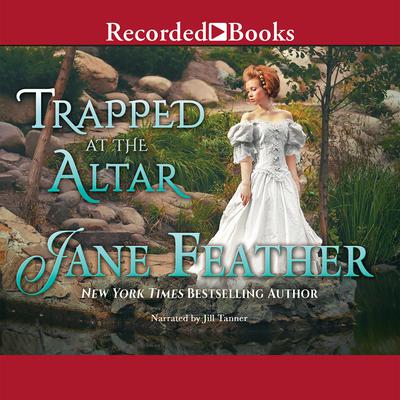 Trapped at the Altar

The first in an all-new, sizzling historical romance series from New York Times bestselling author Jane Feather. Torn between a true love and family duty Ariadne "Ari" Carfax has never been one to play by the rules; she' s an heiress to the Carfax family, banished from London when Oliver Cromwell seized the throne from King Charles, who has since gained notoriety for pillaging, thieving, and ruling the Carfax Valley with an iron glove. All too soon, Ari finds herself in her family' s legendary vise, forced into a marriage to Ivor Chalfont, Ari' s childhood friend and confidante, against her wishes. While the Carfax family has only its own interest at heart-- a union between the Catholic Carfaxes and Protestant Chalfonts will guarantee the Carfaxes' reinstatement at London court, and the rehabilitation of their noble name-- Ari cannot bear the thought of being separated from her secret lover/poet, Gabriel. She vows to fight her family-- and Ivor-- every step of the way, even when forced into the marital ceremony at her own grandfather' s wake, in a treacherous coup de etat that leaves her wed to another, and eternally broken-hearted. Sending Gabriel to the temporary safety of Lord Monmouth' s outpost at The Hague in Scotland, Ari resigns herself to her new life as Lady Ivor Chalfont-- at least until the newlyweds travel to London, and she can escape her new husband and reunite with Gabriel. As the two make their preparations to travel, however, Ari finds herself entertaining entirely uncharacteristic thoughts about her new husband: she finds that she likes him as perhaps more than a friend, after all. Not wanting to be disloyal to Gabriel, but simultaneously more and more attracted to Ivor, Ari can' t help but give into the physical pull between her and her new husband, and the two embark on a tentative, post-marital courtship that just might hold the seeds of loveuntil, that is, Gabriel spots Ari in London and makes it his mission to get her back. Ari is caught between a lover who might be better left in the past, and a husband who she just might be able to love; who will win Ari' s heart? Set in 1600s England during the tumultuous Monmouth Rebellion, this is the epic story of what happens when the one thing we think we can trust-- our hearts-- turns out to be the most duplicitous.

Jane Feather is the New York Times bestselling author of more than thirty sensual historical romances. She was born in Cairo, Egypt, and grew up in the south of England. There are more than ten million copies of her books in print.