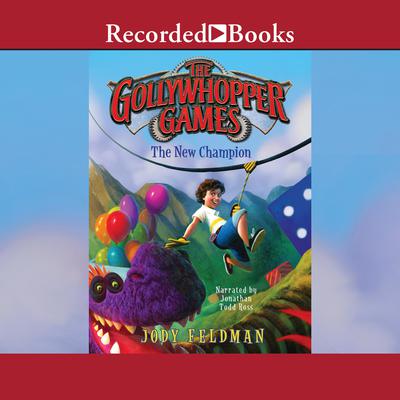 The Gollywhopper Games: The New Champion

Some people are born winners. Not Cameron. His older brother, Spencer, is the one who always wins. Cameron is the loser. So what is Cameron even doing in the second Gollywhopper Games? Solving puzzles, thats what. Doing stunts. Racing against the clock. But its not as if he has a real chance. Not like Spencer. Not like the 999,999 other kids competingon national TV inside a giant toy factory!for one million dollars. Plus instant fame. Plus bragging rights for eternity. Cameron wont be the winner. He knows that for sure. But there are a few things Cameron doesnt know. For fans of Charlie and the Chocolate Factory and The Mysterious Benedict Society, here are brainscrambling puzzles, nonstop action, and surprises around every corner!

Jody Feldman has always loved riddles and brainteasers and word games, and she lives in a city on a river whose name contains four s’s, two p’s, and four i’s. Jody has written as many books for young readers as there are players in a doubles tennis match. To find out how many brothers she has, take the number of bases on a baseball diamond and divide it by the number of times Grover Cleveland was president of the United States.