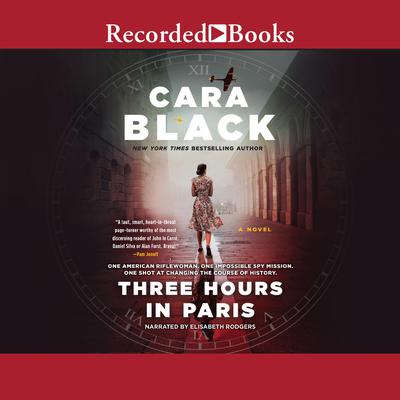 In June of 1940, when Paris fell to the Nazis, Hitler spent a total of three hours in the City of Light abruptly leaving, never to return. To this day, no one knows why. The New York Times bestselling author of the Aimée Leduc investigations reimagines history in a masterful, pulse-pounding spy thriller. Kate Rees, a young American markswoman, has been recruited by British intelligence to drop into Paris with a dangerous assignment: assassinate the Führer. Wrecked by grief after a Luftwaffe bombing killed her husband and infant daughter, she is armed with a rifle, a vendetta, and a fierce resolve. But other than rushed and rudimentary instruction, she has no formal spy training. Thrust into the redhot center of the war, a country girl from rural Oregon finds herself holding the fate of the world in her hands. When Kate misses her mark and the plan unravels, she is on the run for her lifeall the time wrestling with the suspicion that the whole operation was a set-up. Cara Black, doyenne of the Parisian crime novel, is at her best as she brings Occupation-era France to vivid life in this gripping story about one young woman with the temerityand driveto take on Hitler himself.

“The wartime city and its grim undercurrent of fear are evocatively portrayed…Three Hours in Paris is reminiscent of Alan Furst at his best.” —Financial Times (London)
“An evocative depiction of wartime Paris and a lead you can’t help rooting for…If you’re seeking old-fashioned escapism, this has it in spades.” —The Times (London)
“This new book shows Black can ratchet up the tension many notches.” —Seattle Times
“Black…excels at setting vivid scenes, creating lively character,. and maintaining pulse-elevating suspense. Three Hours in Paris, with its timetable structure and its hunt for a covert operative, recalls such comparable works as Frederick Forsyth’s The Day of the Jackal and Ken Follett’s Eye of the Needle.” —Wall Street Journal
“Chances that you’ll be able to put Black’s thriller down once you’ve picked it up? Also slim to none.” —Washington Post