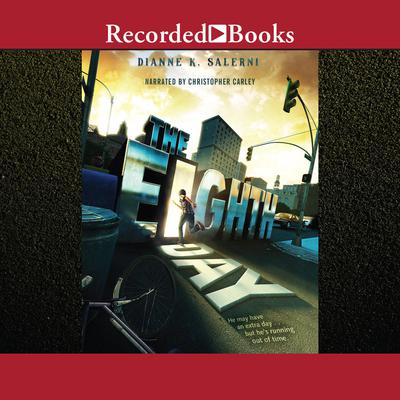 WHEN NEWLY ORPHANED JAX AUBREY awakes to a world without people the day after his thirteenth birthday, he thinks its the apocalypse. But then the next day is a regular old Thursday. Has Jax gone crazy? Whats going on? Riley Pendare, Jaxs sort of clueless eighteen-year-old guardian, breaks the news: Jax just experienced the Eighth Day, an extra twenty-four-hour period between Wednesday and Thursday. Some people, like Jax and Riley, have the ability to live in all eight days. But others, like Evangeline, the teenage girl whos been hiding in the house next door for years, exist only on this special day. At first its awesome to have a secret day. But as Jax gets to know the very guarded Evangeline, he discovers that she is the sought-after key to an ancient spell rooted in Arthurian legend. And Rileywho forgets to pay bills and buy groceries!is sworn to keep her safe from those who want to use her to eliminate the seven-day world and all who live there. Jax tries to protect Evangeline, but with his new friends life on the line, as well as the threat of human destruction, he is faced with an impossible choice: trigger a real apocalypse or sacrifice Evangeline. WITH A WHOLE EXTRA DAY TO FIGURE THINGS OUT, IT COULDNT BE TOO HARD . . . RIGHT?