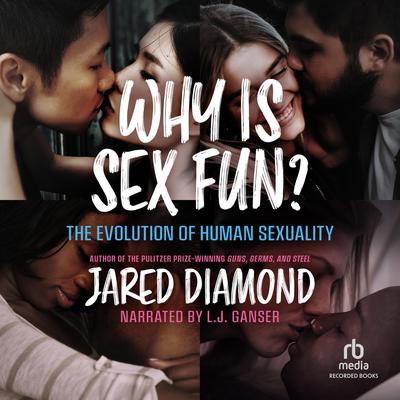 Why is Sex Fun?: The Evolution of Human Sexuality

To us humans the sex lives of many animals seem weird. In fact, by comparison with all the other animals, we are the ones with the weird sex lives. How did that come to be?Just count our bizarre ways. We are the only social species to insist on carrying out sex privately. Stranger yet, we have sex at any time, even when the female can't be fertilized (for example, because she is already pregnant, post-menopausal, or between fertile cycles). A human female doesn't know her precise time of fertility and certainly doesn't advertise it to human males by the striking color changes, smells, and sounds used by other female mammals.Why do we differ so radically in these and other important aspects of our sexuality from our closest ancestor, the apes? Why does the human female, virtually alone among mammals go through menopause? Why does the human male stand out as one of the few mammals to stay (often or usually) with the female he impregnates, to help raise the children that he sired? Why is the human penis so unnecessarily large?There is no one better qualified than Jared Diamond-renowned expert in the fields of physiology and evolutionary biology and award-winning author-to explain the evolutionary forces that operated on our ancestors to make us sexually different. With wit and a wealth of fascinating examples, he explains how our sexuality has been as crucial as our large brains and upright posture in our rise to human status.

Jared Diamond is a professor of geography at the University of California, Los Angeles. He began his scientific career in physiology and expanded into evolutionary biology and biogeography. He has been elected to the National Academy of Sciences, the American Academy of Arts and Sciences, and the American Philosophical Society. Among Dr. Diamond’s many awards are the National Medal of Science, the Tyler Prize for Environmental Achievement, Japan’s Cosmos Prize, a MacArthur Foundation Fellowship, and the Lewis Thomas Prize honoring the Scientist as Poet, presented by Rockefeller University. He has published more than two hundred articles and his book Guns, Germs, and Steel was awarded the Pulitzer Prize.