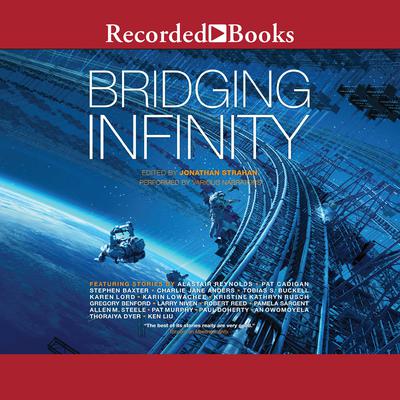 By Jonathan Strahan  and various authors
Read by  various narrators

The latest volume in the Hugo award-winning Infinity Project series, showcasing all-original hard science fiction stories from the leading voices in genre fiction. Sense of wonder is the lifeblood of science fiction. When we encounter something on a truly staggering scale - metal spheres wrapped around stars, planets rebuilt and repurposed, landscapes transformed, starships bigger than worlds - we react viscerally. Fear, reverence, admiration - how else are we to react to something so grand? Bridging Infinity puts humanity at the heart of these vast undertakings - as builder, as engineer, as adventurer - reimagining and rebuilding the world, the solar system, and even the entire universe. This continuation of the award-winning Infinity Project anthology series features bold new stories from Stephen Baxter, Elizabeth Bear, Gregory Benford, Zachary Brown, Pat Cadigan, Kameron Hurley, Scott Lynch, Vonda N. McIntyre, Hannu Rajaniemi, Allan Steele, and many more. Author bio: Jonathan Strahan is an award-winning editor, anthologist, and podcaster. Since 1997 he has has edited more than forty anthologies including nine exceptional collections for Solaris that include the Infinity Project, the celebrated fantasy Fearsome series, and the Best of Science Fiction and Fantasy series. He is the recipient of the World Fantasy Award, a three-time winner of the Locus Award, a four-time winner of the Aurealis Award, and an eight-time Hugo Award nominee. He is the reviews editor of Locus, and the co-host of The Coode Street Podcast. He lives in Perth, Western Australia with his wife and their two daughters.

Stephen Baxter is an acclaimed, multiple award–winning author whose many books include the Xeelee Sequence series, the Time Odyssey trilogy (written with Arthur C. Clarke), and The Time Ships, a sequel to H. G. Wells’s classic The Time Machine. He lives in England.

Vonda N. McIntyre (1948–2019) was an award–winning and New York Times bestselling author of science fiction. She was one of the earliest successful graduates of the Clarion Science Fiction Writers’ Workshop. She gained prominence with the 1973 publication of “Of Mist, and Grass, and Sand,” which won a Nebula Award for Best Novelette and served as the initial section of Dreamsnake, which won both a Nebula and a Hugo award. The Crystal Star made the New York Times bestseller list.

Scott Lynch is a writer of fantasy novels. He has also worked as a freelance writer, dishwasher, waiter, web designer, marketing writer, office manager, and prep cook. He lives in New Richmond, Wisconsin.

Kameron Hurley is an award-winning writer of essays and science fiction and fantasty. She is the author of the Hugo Award-winning We Have Always Fought, as well as the Worldbreaker Saga, the Gods’ War Trilogy, and numerous short stories.

Zachary Brown is pseudonym. Brown is a New York Times bestselling author as well as a Nebula and World Fantasy Award finalist.

Gregory Benford is a professor of physics and astronomy at the University of California, Irvine. A Woodrow Wilson Fellow and a member of Phi Beta Kappa, he received the Lord Prize for contributions to science in 1995 and the Asimov Memorial Award for popularizing science in 2007. He has written numerous works of science fiction, receiving a Nebula Award and a John W. Campbell Memorial Award for his novel Timescape.