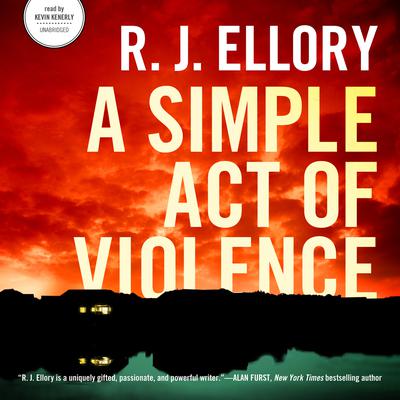 A Simple Act of Violence

Washington, embroiled in midterm elections, did not want to hear the truth about an unsettling series of murders. But when the newspapers reported a fourth killing, when they gave the killer a name and details of his horrendous crimes, few people could ignore it.

Detective Robert Miller is assigned to the case and rapidly uncovers a complication: the victims do not officially exist. Their personal details do not register on any known systems, and as Miller unearths ever more disturbing facts, he starts to face truths about the corrupt world he lives in—truths so far removed from his own reality that he begins to fear for his life.

In the tradition of the masters of suspense, R. J. Ellory has written a shocking and tense narrative of politics and violence in the nerve center of America. As Detective Miller becomes more and more embroiled in the shifting realities of the case, the reader is irresistibly propelled through the intrigues and betrayals of Washington’s elite. This controversial and timely novel explores the notions of identity and hidden government dealings, and it is sure to stay with the reader long after the final page.

“The backstory is ingeniously written as a first-person account of the relationship of the killer to his victims and relates how passions of the persons involved and their actions lead up to the present. The DC murder investigations, written in third person, provide a quick read and plenty of blood and gory scenes to satisfy the taste of the most bloodthirsty thriller fan. There is something for everyone in A Simple Act of Violence…This crime thriller will delight the palate of lovers of political intrigue in international venues, events that ring of historical truth, bringing the action closer to the realm of real life.” —New York Journal of Books
“A Simple Act of Violence is a masterful exercise in suspense that keeps unfolding and taking the reader to unexpected places. This one will keep you up late reading, and then you won’t sleep.” —John Lutz, New York Times bestselling author
“A police procedural…shape-shifts into a conspiracy thriller and a historical exposé…There are powerful scenes and vivid images.” —Wall Street Journal
“An awesome achievement—a thriller of such power, scope, and accomplishment that fanfares should herald its arrival.” —Guardian (Manchester)
“A real page turner—shocking and deeply moving by turn.” —Scotsman
“This is a book with everything that a fan of modern mystery fiction could hope for: a labyrinthine plot, unbearable tension, controversy, and a social conscience.” —Crimesquad
“Ellory brings a new psychological and moral tension to the genre, mixing Washington politics with serial killings.” —Saga
“So skillful is his use of dialogue and the Washington location, in a thriller that propels the reader along and offers shocks and suspense in equal measure, that one never doubts the authenticity of his American credentials…This is a long, substantial novel. Yet had it been twice as long this reviewer would still have wanted more.” —Waterstones Books Quarterly
“A superb crime thriller…Impressive prose and pacing, coupled with a grim, unflinching view of reality that James Ellroy would recognize, make this a must-read for noir fans.” —Publishers Weekly (starred review)
“Kevin Kenerly narrates Ellory’s thriller with all the suspense and depth it deserves. He offers an intense, deep, and even troubled first-person portrayal of Jon Robey, a CIA assassin with a backstory that spans from his childhood to his 1980s operations in Nicaragua to his present-day role as a college professor. His chronicle is juxtaposed with the third-person account of Detective Robert Miller, who leads the Washington DC Police Department’s investigation into Robey’s connection to the murders of four women. Kenerly provides an interesting touch of warmth beneath the urban-cop exterior of Miller, along with a host of believable supporting characters. This is a crime story with government conspiracy, violence, corruption, and psychological intrigue expertly woven throughout by both author and narrator.” —AudioFile
“Ellory is back with an amazing new novel. It’s not only a mystery with enough plot twists to keep the most jaded fan of the genre guessing, it’s also a high-speed car chase of a thriller…Ellory lures the reader into a Machiavellian tapestry of international proportions…Many writers who attempt to construct a novel with levels of geopolitical intrigue found here wind up producing a string of lame polemics or, even worse, a conspiracy-theory rant. It’s a tribute to Ellory’s mastery of his craft to note that he avoids these pitfalls completely. This is a superbly entertaining book and one that will endure in the reader’s thoughts long after the last page turns. After several fine novels, it’s high time for Ellory to take his rightful place on crime fiction’s A-list.” —Booklist (starred review)
“A very cunningly constructed serial killer thriller.” —Bookseller Paperback Preview
“Grips with an iron fist until the bitter end.” —Shortlist
“Conspiracy buffs will have a field day.” —Kirkus Reviews

R. J. Ellory, orphaned at the age of seven and sent to prison for poaching when he was seventeen, immersed himself in literature and set about learning the craft of writing fiction. He now divides his time between writing and volunteer programs in drug rehabilitation and youth literacy. He is married with one son.