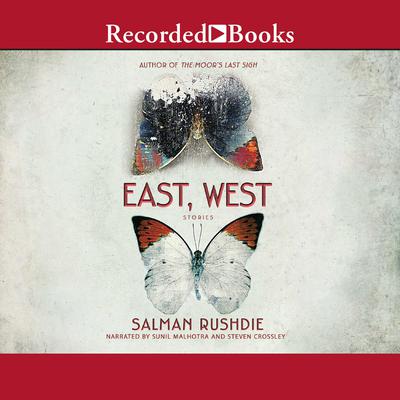 By Salman Rushdie
Read by Steven Crossley  and Sunil Malhotra

A rickshaw driver dreams of being a Bombay movie star; Indian diplomats, who as childhood friends hatched Star Trek fantasies, must boldly go into a hidden universe of conspiracy and violence; and Hamlet's jester is caught up in murderous intrigues. In Rushdie's hybrid world, an Indian guru can be a redheaded Welshman, while Christopher Columbus is an immigrant, dreaming of Western glory. Rushdie allows himself, like his characters, to be pulled now in one direction, then in another. Yet he remains a writer who insists on our cultural complexity; who, rising beyond ideology, refuses to choose between East and West and embraces the world.

Sir Salman Rushdie is the author of many novels, including Grimus, Midnight’s Children, Shame, The Satanic Verses, The Moor’s Last Sigh, The Ground beneath Her Feet, Fury, Shalimar the Clown, and The Enchantress of Florence. He has also published works of nonfiction, including The Jaguar Smile, Imaginary Homelands, The Wizard of Oz, and, as coeditor, The Vintage Book of Short Stories. He has received many awards for his writing and is a fellow of the Royal Society of Literature and Commandeur des Arts et des Lettres. In 1993 Midnight’s Children was judged to be the “Booker of Bookers,” the best novel to have won the Booker Prize in its first twenty-five years. In June 2007 he received a knighthood in the Queen’s Birthday Honours.