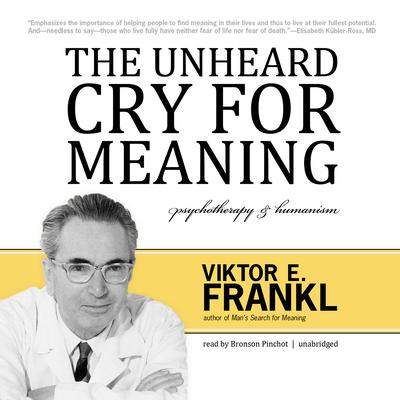 The Unheard Cry for Meaning: Psychotherapy and Humanism

Upon his death in 1997, Viktor E. Frankl was lauded as one of the most influential thinkers of our time. The Unheard Cry for Meaning marked his return to the humanism that made Man’s Search for Meaning a bestseller around the world. In these selected essays, written between 1947 and 1977, Dr. Frankl illustrates the vital importance of the human dimension in psychotherapy. Using a wide range of subjects—including sex, mortality, modern literature, competitive athletics, and philosophy—he raises a lone voice against the pseudo-humanism that has invaded popular psychology and psychoanalysis. By exploring mankind’s remarkable qualities, he brilliantly celebrates each individual’s unique potential, while preserving the invaluable traditions of both Freudian analysis and behaviorism.

“Emphasizes the importance of helping people to find meaning in their lives and thus to live at their fullest potential. And—needless to say—those who live fully have neither fear of life nor fear of death.” —Elisabeth Kübler-Ross, MD

Viktor E. Frankl (1905–1997) was a professor of neurology and psychology at the University of Vienna Medical School and Distinguished Professor of Logotherapy at the US International University. He is the founder of the “Third Viennese School of Psychotherapy,” commonly known as logotherapy. During World War II, Frankl spent three years in multiple concentration camps, including Auschwitz and Dachau. Since that time, he has published numerous books and has been a visiting professor at Harvard, Duquesne, and Southern Methodist universities. He has received a number of honorary doctorate degrees from many colleges and universities, including Loyola University in Chicago, Mount Mary College, and Edgecliff College. He has been a guest lecturer at universities worldwide and served as the president of the Austrian Medical Society of Psychotherapy.