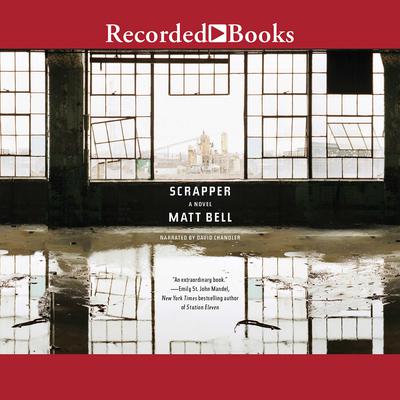 For fans of The Dog Starsand Station Eleven, Scrapperuses the real-life dystopia of a devastated Detroit serves as a backdrop for one man's desperate quest for justice and redemptive grace. In the wake of tragedy, ex-boxer Kelly returns to Detroit after years in the south. Unable to find work, he scavenges for scrap metal in the hundred-thousand abandoned buildings at the heart of the city, an area he calls "the zone," where one day he finds something far more valuable than the copper he's come to steal: a kidnapped boy handcuffed to a bed, crying out for rescue. After being celebrated as a hero, Kelly secretly decides to avenge the boy's unsolved kidnapping, a task that will take him deeper into the zone and into a confrontation with his own past, unearthing long-buried cycles of trauma and cruelty, memories made dangerous again. In the House upon the Dirt between the Lake and the Woodswas a commercial and critical success. Author is very connected in the publishing world and has friends and fans across the country, including many booksellers, reviewers and other industry buzz-builders. After the mythological explorations of his first novel, Scrapperis set in a world closer to our own, expanding his appeal to new readers. Praise for In the House upon the Dirt between the Lake and the Woods An ABA IndieNext Selection Flavorwire Staff Pick/Top 10 Debut of the Year The Nervous Breakdown Book Club Selection "A gripping, grisly tale of a husband's descent into and ultimate emergence from some kind of personal hell."--The New York Times "Bell's novel isn't just a joy to read, it's also one of the smartest meditations on the subjects of love, family and marriage in recent years."-- NPR "Somber, incantatory sentences to hold you within [Bell's] dreamlike creation.... This unique book leaves you with the haunting lesson that even if you renounce and cast away your loved ones, you can never disown the memory of your deeds."-- The Wall Street Journal "Here's a story that stirs the Brothers Grimm and Salvador Dali with its claws...As gorgeous as it is devastating."--The Washington Post "An extraordinary achievement, telling a most ancient story in a way that feels uncannily new."-- The Boston Globe Matt Bell is the author of the novel In the House upon the Dirt between the Lake and the Woods, a finalist for the Young Lions Fiction Award, a Michigan Notable Book, and an Indies Choice Adult Debut Book of the Year Honor Recipient, as well as the winner of the Paula Anderson Book Award. He is also the author of two previous books, How They Were Found and Cataclysm Baby, and his stories have appeared in Best American Mystery Stories, Best American Fantasy, Conjunctions, Gulf Coast, The American Reader, and many other publications. He currently teaches creative writing at Arizona State University. Marketing and Publicity National media campaign targeting Detroit interest as well as building on the success of campaign for IN THE HOUSE UPON THE DIRT BETWEEN THE LAKE AND THE WOODS. The author has also expanded his resume as a reviewer, including doing work for the NYT. $40,000 marketing budget. Pre-publication digital/print advertising across trade venues. Featured galley at ALA Annual and BEA 2015. Multi-stage consumer digital/print advertising One national print consumer facing advertisement. Facebook and AdWords advertising. Consumer-facing pre-pub galley distro via Goodreads. IndieBound White Box mailing.

Matt Bell is the author of Cataclysm Baby, a novella, and How They Were Found, a collection of fiction. His fiction has been anthologized in Best American Mystery Stories 2010, Best American Fantasy 2, and 30 under 30: An Anthology of Innovative Fiction by Younger Writers. He serves as senior editor at Dzanc Books and teaches writing at Northern Michigan University.