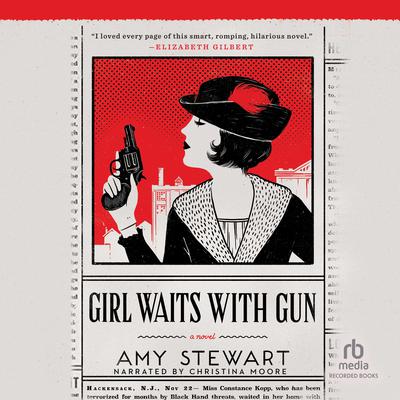 An AudioFile Best Book of the Year in Historical Fiction

A USA Today Pick of New and Noteworthy Novels

A Cosmopolitan Pick for Fall

In 1914, collisions between motor cars and horse-drawn carriages are an everyday occurrence on the streets of Paterson, New Jersey. But when an out-of-control driver smashes into a buggy driven by Constance, Norma, and Fleurette Kopp, their lives change forever. Constance, the oldest, demands payment for the damages, but quickly realizes that she is dealing with a madman - Henry Kaufman, a silk manufacturer with a drinking problem and a dangerous group of associates. Soon the Kopp home is under siege. The sisters face threats of arson, kidnapping and white slavery. Bricks come flying through their windows, and shots are fired at their house late at night. Even the sheriff can't solve the case on his own. He issues revolvers to the Kopp sisters, posts guards at their house, and enlists Constance's help in catching Kaufman. In the process, Constance finds herself pulled into an underworld of abused factory workers, missing children, and dirty dealings. Her attempts to help another woman in trouble forces her to confront her own past and imagine a different future for herself and her sisters. Before the collision, she was just a bored thirty-five year-old woman living at home with her sisters in the New Jersey countryside, stuck in a life she didn't want but couldn't escape. But the minute Constance is issued a gun, she finds her calling. Set against the backdrop of the famous Paterson Silk Strike and based on actual events, Girl Waits With Gun is the first in a series of novels based on the real life adventures of Constance, Norma, and Fleurette Kopp. Drawing on extensive research into newspaper reports, courthouse files, genealogical archives, letters, and photographs, this intriguing story remains true to the historical record. The Kopp sister's long-forgotten exploits, as told in the series, actually did make headlines nationwide in their day. The case against Henry Kaufman opened the door to a life of crime-fighting and mystery-solving for the Kopp sisters. In the fifteen years following the incident, Constance would serve as one of the nation's first female deputy sheriffs, perform intelligence work during World War I, and run a detective agency with her sisters through the 1920s- all of which will be the subject of future books in the series. Amy Stewart is a four-time New York Times' best-selling author (THE DRUNKEN BOTANIST, WICKED PLANTS, WICKED BUGS, and FLOWER CONFIDENTIAL). She came upon this story when researching THE DRUNKEN BOTANIST and it took hold of her and didn't let go.

“This rollicking western about a woman who’ll do anything to save her family is based on the true tale of one of the country’s first female deputy sheriffs.” —People
“The sisters’ personalities flower under Stewart’s pen, contributing happy notes of comedy to a terrifying situation.” —New York Times Book Review
"[A] marvellous romp.” —Guardian (London)
“Stars an unforgettable, not-to-be-messed-with heroine – one of the nation’s first female deputy sheriffs…The rest is kickass history.” —Marie Claire
“Filled with historical detail without being weighed down by it, the novel is a cinematic story of the women, the siege instigated by their powerful enemy, and their brave efforts in the face of real violence.” —Los Angeles Times
“Christina Moore is simply spectacular narrating Amy Stewart’s story…Moore’s depiction of Kopp sounds exactly as one would expect for a woman who was willing to wait on a corner with a gun to end a campaign of terror against her family. In addition, Moore provides subtly distinctive voices for the rest of Stewart’s characters….Moore makes listening an immersive experience. Winner of the AudioFile Earphones Award.” —AudioFile
“Stewart deftly tangles and then unwinds a complicated plot with nice period detail…but the real interest here is rooting for Constance as she refuses to be patronized or reduced to a dependent of her well-meaning brother, who thinks three unmarried women should naturally be living with a male protector.” —Kirkus Reviews (starred review)