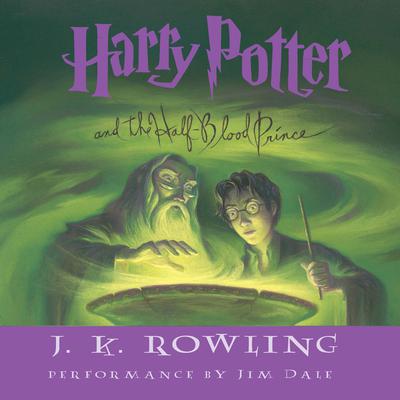 Harry Potter and the Half-Blood Prince

The war against Voldemort is not going well: even Muggle governments are noticing. Ron scans the obituary pages of The Daily Prophet looking for familiar names. Dumbledore is absent from Hogwarts for long stretches of time, and the Order of the Phoenix has already suffered losses.

As in all wars, life goes on. Sixth-year students learn to Apparate--and lose a few eyebrows in the process. The Weasley twins expand their business. Teenagers flirt and fight and fall in love. Classes are never straightforward, though Harry receives some extraordinary help from the mysterious Half-Blood Prince.

So it's the home front that takes center stage in the multilayered sixth installment of the story of Harry Potter. Here at Hogwarts, Harry will search for the full and complex story of the boy who became Lord Voldemort--and thereby find what may be his only vulnerability.

“While Rowling has long been praised for her cleverness and wit, the strength of Book 6 lies in her subtle development of key characters, as well as her carefully nuanced depiction of a community at war…A magnificent spectacle more than worth the price of admission, Harry Potter and the Half-Blood Prince will blow you away.” —Amazon.com
“Once again, Jim Dale’s performance casts its spell, bewitching listeners with every nuance. His voice aches with appropriate adolescent longing as Harry, in his sixth year at Hogwarts, deals with Quidditch, love potions, and heartache, and he positively slithers with serpentine menace whenever Severus Snape’s around…Jim Dale’s astonishing performance keeps hearts pounding and pulses racing right up to the final words.” —AudioFile
“It’s a mystery how Dale manages to keep pace with the huge cast of characters Rowling continues to create for the world of Harry Potter. It’s also a mystery how he so effortlessly slips in and out of each character and never misses a beat between narration and dialog. It’s an amazing effort and makes it a pleasure for Muggles to enter this magical world.”  —Kliatt

J. K. Rowling is the author of the bestselling Harry Potter novels, which have sold more than 450 million copies worldwide in more than two hundred territories and have been translated into seventy-four languages and made into eight blockbuster films. She has also written two small volumes, which appear as the titles of Harry’s schoolbooks within the novels: Fantastic Beasts & Where to Find Them and Quidditch through the Ages. Her Tales of Beedle the Bard quickly became the fastest selling book of 2008. As well as an OBE for services to children’s literature, Rowling is the recipient of numerous awards and honorary degrees, including the Prince of Asturias Award for Concord, the French Legion of Honor, and the Hans Christian Andersen Literature Award, and she has been a commencement speaker at Harvard University. She supports a wide number of causes through her charitable trust Volant and is the founder of Lumos, a charity working to transform the lives of disadvantaged children.