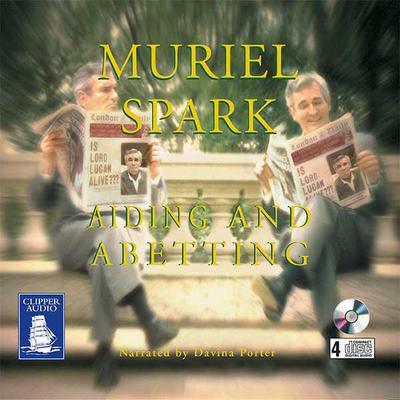 Dame Muriel Spark has written 21 novels. She was awarded the Order of the British Empire in 1993 and Commandeur de L'Ordre Arts et des Lettres in 1996. Aiding and Abetting, based on an actual murder case, becomes a fascinating mystery under Spark's sharp pen. Lord Lucan disappeared in 1974, shortly after murdering his children's nanny in a botched attempt to kill his wife. Despite reports of sightings, no one knows for sure where the crafty fugitive is. Noted psychiatrist Dr. Hildegard Wolf is intrigued when two patients begin therapy with her, both claiming to be the notorious Lord Lucan. It's not just the patients who have secrets, however. The good doctor has also abandoned a previous life.

Muriel Spark (1918–2006) was born in Edinburgh, Scotland. She was the author of over twenty novels, including The Prime of Miss Jean Brodie, as well as critical biographies, radio plays, children’s books, poetry, and short-story collections. She was made a Dame of the British Empire in 1993 and a Commandeur des Arts et des Lettres in 1996.