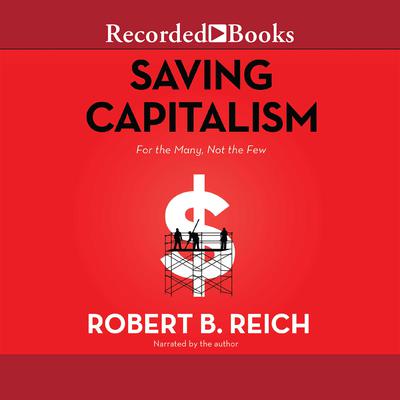 Saving Capitalism: For the Many, Not the Few

In SAVING CAPITALISM, Robert Reich reveals the entrenched cycles of power and influence that have damaged American capitalism, perpetuating a new oligarchy in which the one percent get ever richer and the rest-middle and working class alike-lose ever more economic agency, making for the greatest income inequality and wealth disparity since World War II. In brilliantly provocative detail, he shows how our misguided veneration of the "free market" has led us here, and offers an empowering call to civic action as well as specific ideas for reform. Key selling points: - AUTHOR APPEAL: A former White House advisor, talk show fixture, lecturer, essayist, and the star of last year's acclaimed documentary Inequality for All, Robert Reich is a beloved ambassador of progressive economics and a voice of reason in a media climate of fear-mongering and finger-pointing. He has 500,000+ Facebook likes and 200,000+ Twitter followers, and views of his YouTube videos are in the millions. - SALES: Aftershock (2010) has sold almost 136,000 copies across all formats, and the 2012 eBook exclusive Beyond Outrage has sold over 69,000, proving Reich's popularity with traditional and digital-first buyers alike. Overall Reich sales are nearing 700,000 with backlist titles like The Work of Nations (1991) still in print. - MEDIA STAR: A seasoned undergraduate professor and media veteran, Reich presents his ideas with vigor, clarity and humor when necessary. He is as comfortable on NPR, MSNBC, CNN, Conan O'Brien and Jon Stewart as he is sparring with Bill O'Reilly. - HEADLINE WORTHY: This is Reich's boldest and most pwerful book to date-and his most commercial. No holds barred. His dismissal of the "free market" as a concept, his advocacy of organized labor, his unsparing exposure of legal insider trading and the revolving door between Wall Street and the Capitol, the increasingly scary influence of money on our political culture he condemns-this book will be a lightning rod for debate while serving as a rallying cry, with specific recommendations for reform. Author Bio: Robert Reich is Chancellor's Professor of Public Policy at the Richard and Rhoda Goldman School of Public Policy at the Unviersity of California, Berkeley. He has served in three national administrations, most recently as secretary of labor under President Bill Clinton. He has written thirteen books, including The Work of Nations, which has been translated into twenty-two languages, and the best sellers Supercapitalism and Locked in the Cabinet. His articles have appeared in The New Yorker, The Atlantic, The New York Times, The Washington Post, and The Wall Street Journal. He is also cofounding editor of The American Prospect magazine and provides