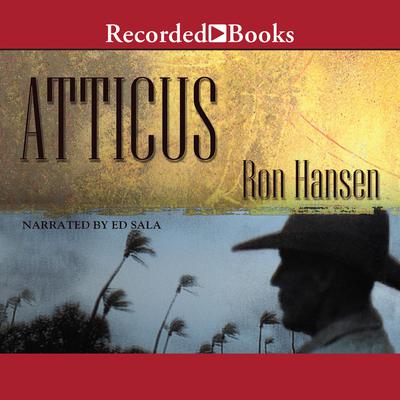 Ron Hansen has won an Award in Literature from the American Academy and Institute of Arts and Letters for his rich writing and poetic style. Atticus begins in the vein of a contemporary western. As it unfolds, it includes an intriguing murder mystery and a dramatic parable of the prodigal son. For years, prosperous Colorado rancher Atticus Cody has tried to understand his rootless son, Scott, who is now living a marginal life in Mexico. When he learns that Scott is dead, apparently by suicide, Atticus travels to Mexico to claim the body. Instead, he discovers evidence of murder and a trail of clues that will lead him to a strange and wonderful epiphany. Suspense and conflict, love and forgiveness combine in this deft story of Atticus' search for his son. Each character stands out, sharply etched, against the bright Mexican landscape.

Ron Hansen is the author of many novels—including Mariette in Ecstasy, Desperadoes, and A Wild Surge of Guilty Passion—and two short-story collections, among them She Loves Me Not. His novel The Assassination of Jesse James by the Coward Robert Ford was a finalist for the PEN/Faulkner Award. He graduated from Creighton University in Omaha and went on to the University of Iowa Writers’ Workshop where he studied with John Irving. He is now Gerard Manley Hopkins SJ Professor in Arts and Humanities at Santa Clara University in northern California.