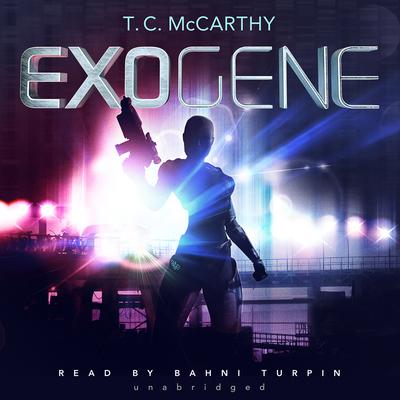 Exogene (n): factor or agent (as a disease-producing organism) from outside the organism or system. Also (slang): classified Russian program to merge protohumanoids with powered armor systems.

Catherine is a soldier. Fast, strong, and lethal, she is the ultimate in military technology. She’s a monster in the body of an eighteen-year-old girl. Bred by scientists, grown in vats, indoctrinated by the government, she and her sisters will win this war—no matter the cost.

And the costs are high. Their lifespan is short; as they age they become unstable and undergo a process called “the spoiling.” On their eighteenth birthday they are discharged. Lined up and shot like cattle.

However, the truth is, Catherine and her sisters may not be strictly human, but they’re not animals. They can twist their genomes and indoctrinate them to follow the principles of Faith and Death, but they can’t shut off the part of them that wants more than war. Catherine may have only known death, but she dreams of life, and she will get it at any cost.

“Former CIA analyst McCarthy delivers a stark and wrenching sequel to Germline…The conclusion is simultaneously heartbreaking and triumphant, and utterly appropriate for the brutal, bloody, and magnificent story.” —Publishers Weekly (starred review)
“Catherine, known to her fellow soldiers as Little Murderer, lives to kill, but as the day of her discharge approaches something shifts inside her, a corruption known as “the spoil,” and while her body deteriorates her mind starts to question. She’s a fascinating creation, an inhuman killing machine finding her own humanity. Her perspective is at once childlike and brutal, combining indoctrinated religious fervour with a cold violence, without moral qualms. Exogene is both disorienting and an effective portrayal of a protagonist with a broken mind.” —Guardian, UK
“McCarthy portrays Catherine as a complex mixture of zealotry and skepticism, depicting a mindset that is effectively outside human experience while also very much identifiable. Although the novel takes place in the midst of a war and involves a number of battles, it’s less a war story than a rumination on identity and faith, anchored by a protagonist who brings surprising and moving depths to familiar science-fiction concepts.” —Kirkus Reviews (starred review)