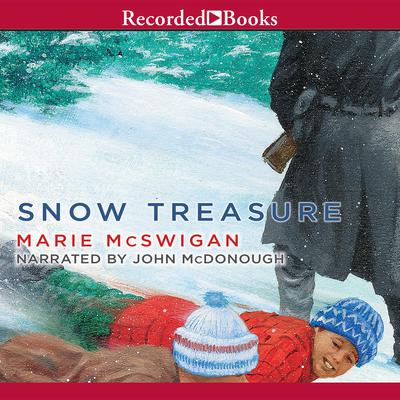 For 12-year-old Peter Lundstrom, the Norwegian winter of 1940 begins like any other. When he isn't in school, he spends the cold days outside, going sledding in the deep snow of his mountain village. But all around him, the adults are talking about the war that is raging through much of Europe. One day Uncle Victor warns that German soldiers will invade soon. He believes they will try to steal the bank's gold bullion. But he has a daring plan to protect the treasure. The only trouble is-it relies on Peter and his friends. Will the village children be able to fool the suspicious Nazis? Marie McSwigan's exciting Snow Treasure is based on the tale a Norwegian ship captain told as he unloaded a cargo of gold in Baltimore. Though the children and the village were never identified, the story is thought to be true by many. Narrator John McDonough's stirring performance captures the tension and adventure as Peter and his friends risk their lives to help their country.

“[Snow Treasure] is well written and gives young children a perspective that most history books miss when covering World War II...This excellent novel is a ‘must read’ for children interested in the war and the role that young people played during that time period.” —Children’s Literature
“There are some books that you purchase to read over and over because the story is so well told...Snow Treasure...is such a book.” —Examiner.com
“Narrator John McDonough’s use of drama and suspense keeps the story moving along. This audiobook would be an excellent supplement to history lessons on World War II. It lends itself well to group or individual listening.” —Library Journal (audio review)

Marie McSwigan (1896–1962) wrote for Pittsburgh newspapers and worked in publicity for many area institutions. Besides ten children’s books, she wrote two adult biographies, Shy Hooks and Athlete of Christ, as well as several other works of nonfiction.