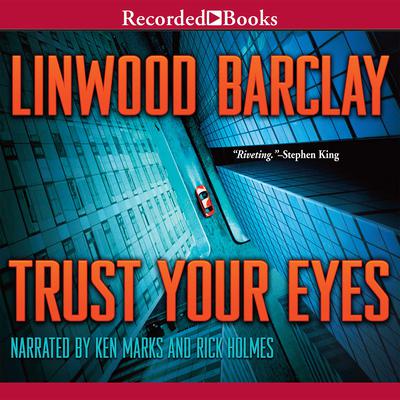 By Linwood Barclay
Read by Ken Marks and Rick Holmes

Best-selling author Linwood Barclay's The Acciden tinspired Stephen King to comment, ''With this novel, Barclay vaults to the top of the suspense pantheon.'' Trust Your Eyes follows schizophrenic Thomas Kilbride, who believes he's a CIA operative, as he explores and memorizes the streets of the world through images he finds on the Whirl360 website. While examining an image of downtown New York City, he thinks he sees a woman being murdered. Compelled to investigate, Thomas is soon drawn into a web of conspiracy and lies.

Linwood Barclay is the author of numerous novels for adults and two thrillers for children, including the international bestseller No Time for Goodbye. His books have been translated into more than two dozen languages. He wrote the screenplay adaptation for his novel Never Saw It Coming, and his book The Accident has been made into a television series in France. A native of Connecticut, he now lives in Toronto with his wife, Neetha.