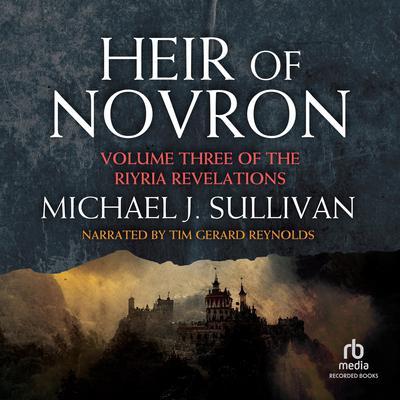 A rising star in the fantasy genre, Michael J. Sullivan has built an ardent following for his Riyria Revelations saga, which draws to its epic conclusion in Heir of Novron. On the holiday of Wintertide, the New Empire plans to burn the Witch of Melengar and force the Empress into a marriage of their own design. But they didn't account for Royce and Hadrian finally locating the Heir of Novron-or the pair's desire to wreak havoc on the New Empire's carefully crafted scheme.

“Death traps, magic, long-lost children, and real and decoy heirs abound…A fun story with plenty of sword fighting and some genuine surprises.” —Publishers Weekly
“Tim Reynolds maintains a tone of engagement as the complex strands from the prior novels in the series are drawn together…Reynolds infuses the characters with attitudes that make clear their social status. Many characters are memorable. Their relationships with their comrades are complicated, and Reynolds shows their ambivalence and affection toward one another, as well as their mutual suspicions.” —AudioFile