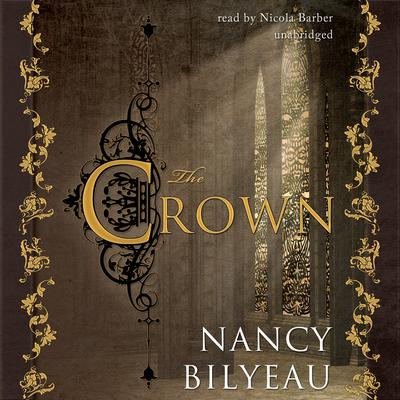 SoundCommentary.com’s The Best of the Best, 2013

In this debut historical thriller, an aristocratic young nun must find a legendary crown in order to save her father’s life and preserve all she holds dear.

When novitiate Joanna Stafford learns her rebel cousin is condemned by King Henry VIII to be burned at the stake, she makes the decision to break the sacred rule of enclosure and flee her Dominican order in Dartford to stand at her cousin’s side.

Arrested for interfering with king’s justice, Joanna, along with her father, Sir Richard Stafford, is sent to the Tower of London. Joanna’s father is brutally tortured by Stephen Gardiner, the Bishop of Winchester, who leads the Catholic faction bent on saving England’s monasteries from destruction. In order to save her father, Joanna must submit to Gardiner’s will and become a pawn in the struggle between religious extremes. Gardiner forces Joanna to return to Dartford Priory with a mission: find the long-hidden crown worn by Saxon King Athelstan in AD 937 during the historic battle that first united Britain. Gardiner believes the crown itself to possess a mystical power that will halt the Reformation.

Uncovering only dark betrayals and murder at Dartford, Joanna flees with Brother Edmund, a troubled young friar, and with time running out, their hunt for the crown leads them through royal castles, to Stonehenge, and finally to the tomb of the mysterious King Athelstan under Malmesbury Abbey. There Joanna learns the true secret of the crown—a secret tracing all the way back to Golgotha and the relics of the Passion—and must finally determine who to trust and how far she is willing to go to protect a way of life that she passionately loves.

“The events of the period come to life in Nancy Bilyeau’s dazzling and heart-wrenching novel. The Crown is evocative, provocative, and full of intriguing characters—a gorgeously written novel that has mystery and history, pathos and depth. This is a stunning debut about a woman whose spirit shines through and deeply moves the reader.” —M. J. Rose, internationally bestselling author
“Nancy Bilyeau’s polished, inventive debut has all the ingredients of the best historical fiction: a broad cast of characters, well-imagined settings, and vivid storytelling…In Joanna Stafford, Bilyeau has given us a memorable character who is prepared to risk her life to save what she most values, while Stafford’s desperate search for a lost religious relic will satisfy even the most ardent mystery fans.” —Deborah Harkness, author of A Discovery of Witches
“An amazing first novel, filled with excitement, intrigue, espionage, and set against the background of one of the bloodiest periods of British history; the schism between Church and State. It’s an action-packed tale of one nun’s dangerous quest to discover the secrets of an ancient relic that dates back to the time of Christ.” —Katherine Neville, author of The Eight
“Bilyeau deftly weaves extensive historical research throughout, but the real draw of this suspenseful novel is its juicy blend of lust, murder, conspiracy, and betrayal.” —O, the Oprah Magazine
“An engrossing thriller…Her extensive historical research shines.” —Entertainment Weekly
“Part The Da Vinci Code, part The Other Boleyn Girl, it will keep you guessing until the very end!” —Woman’s Day
“[An] inventive thriller…A captivating heroine, Stafford will have you eagerly following every step of her quest.” —Parade
“Bilyeau weaves her breathtaking story through a string of events to a pleasing conclusion while giving the reader a more thorough understanding of a complicated bit of history. Historical fiction as it should be.” —Times-Union (Florida)
“Strong character development, realistic historical details, and an atmosphere of pervasive tension coupled to a fast-paced plot make it compulsively readable.” —Booklist
“This fast-paced debut delivers Tudor intrigue and mystical thrills in one satisfying package.” —Kirkus Reviews
“British voice-over artist Nicola Barber’s excellent narration is fully voiced. She is fluent in Spanish and handles other accents with dexterity. Her seven-year-old boy is as convincing as the fat friar Brother Richard. Listeners [and] fans of historical royal court intrigue will eagerly await the next story in the Joanna Stafford series. Highly recommended.” —SoundCommentary.com

Nancy Bilyeau is a writer and magazine editor who has worked on the staffs of InStyle, Rolling Stone, Entertainment Weekly, and Good Housekeeping. Her latest position is features editor of Du Jour magazine. A native of the Midwest, she graduated from the University of Michigan. She lives in New York City with her husband and two children.