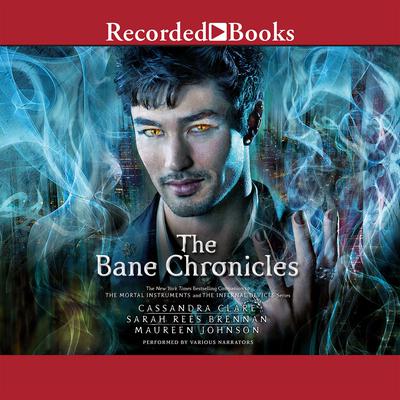 Cassandra Clare is the author of the New York Times, USA Today, Wall Street Journal, and Publishers Weekly bestselling Mortal Instruments series and the Infernal Devices trilogy, and she is coauthor of the Bane Chronicles with Sarah Rees Brennan and Maureen Johnson. She also wrote The Shadowhunter’s Codex with her husband, Joshua Lewis. Her books have more than thirty-five million copies in print worldwide and have been translated into more than thirty-five languages.

Sarah Rees Brennan is the author of several fiction series, including the Demon’s Lexicon, Lynburn Legacy, and the Bane Chronicles series, as well as stand-alone novels. The first book of her Demon’s Lexicon series received three starred reviews and was an ALA Top Ten Best Book for Young Adults. Her novel Unspoken and Team Human, a novel cowritten with Justine Larbalestier, were YALSA Best Fiction for Young Adults picks and TAYSHAS picks.

Maureen Johnson is the bestselling author of several novels for young adults, including the Truly Devious series and the Shades of London series, among others. She has also penned collaborative works, such as Let It Snow with John Green and Lauren Myracle and The Bane Chronicles with Cassandra Clare and Sarah Rees Brennan. Her work has appeared in the New York Times, BuzzFeed, and the London Guardian, and she has also served as a scriptwriter for EA Games. She has an MFA degree in writing from Columbia University.