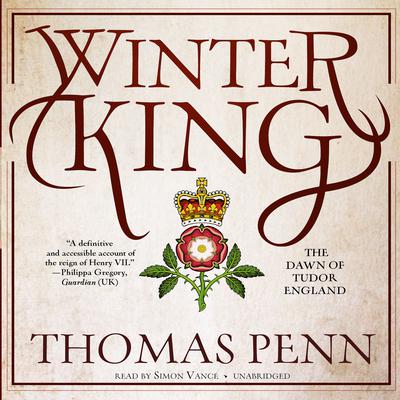 A Guardian Best Book of the Year

A Financial Times Best Book of the Year

A fresh look at the endlessly fascinating Tudors—the dramatic and overlooked story of Henry VII and his founding of the Tudor Dynasty—filled with spies, plots, counter-plots, and an uneasy royal succession to Henry VIII

Near the turn of the sixteenth century, England had been ravaged for decades by conspiracy and civil war. Henry Tudor clambered to the top of the heap, a fugitive with a flimsy claim to England’s crown who managed to win the throne and stay on it for twenty-four years. Although he built palaces, hosted magnificent jousts, and sent ambassadors across Europe, for many Henry VII remained a false king. But he had a crucial asset: his family—the queen and their children, the living embodiment of his hoped-for dynasty. Now, in what would be the crowning glory of his reign, his elder son would marry a great Spanish princess.

Thomas Penn re-creates an England that is both familiar and very strange—a country medieval yet modern, in which honor and chivalry mingle with espionage, realpolitik, high finance, and corruption. It is the story of the transformation of a young, vulnerable boy, Prince Henry, into the aggressive teenager who would become Henry VIII, and of Catherine of Aragon, his future queen, as well as of Henry VII—controlling, avaricious, paranoid, with Machiavellian charm and will to power.

Rich with incident and drama, filled with wonderfully drawn characters, Winter King is an unforgettable account of pageantry, intrigue, the thirst for glory, and the fraught, unstable birth of Tudor England.