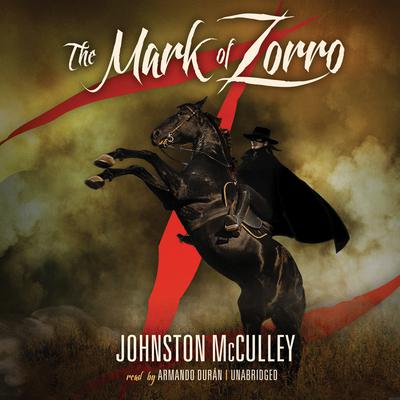 The Mark of Zorro

A 2013 Audie Award Finalist for Classics

1820s California, in a bygone era of sprawling haciendas and haughty caballeros, suffers beneath the whip of oppression. Missions are pillaged, native peasants are abused, and innocent men and women are persecuted by the corrupt governor and his army. But a champion of freedom rides the highways. His identity hidden behind a mask, the laughing outlaw Zorro defies the tyrant’s might. A deadly marksman and a demon swordsman, his flashing blade strikes down those who exploit the poor and oppressed.

First published in 1919, The Mark of Zorro remains a paradigm of swashbuckling adventure and a popular novel to this day.

“Although written nearly a century ago, McCulley’s romantic pulp adventure remains engaging and entertaining…One can’t help but be thrilled at the ironic twists the story takes. Narrator Armando Duran breathes life into the character of Don Diego Vega: by day an effete aristocrat, by night a dashing defender of the poor. Duran draws on his stage experience, his ethnic memory, and his joyful vigor as he tells the story of Señor Zorro’s courtship with Lolita Pulido while bloodying the noses of corrupt government officers. This adaptation of the classic story is delightful from start to climactic finish.” —AudioFile
“A succession of thrills from first page to last…Original…Captivating.” —Boston Traveler