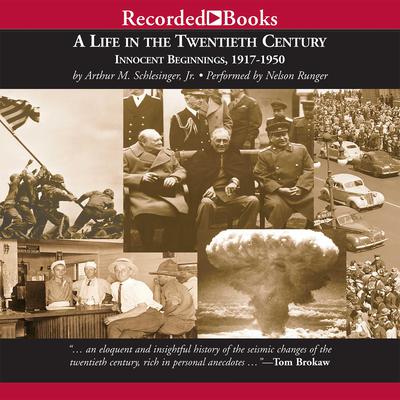 Arthur M. Schlesinger, Jr., a two-time winner of the Pulitzer Prize, is one of the finest historians of our age. A former special assistant to President Kennedy, he received the National Humanities Medal in 1998. In this first volume of memoirs Schlesinger turns a keen eye on his own remarkable life--from his Midwestern upbringing, through his days at Harvard, to his involvement with World War II. The engrossing story of his life reads like a timeline of the twentieth century. With anecdotes featuring the major politicians, intellectuals, and entertainers of the era, it is easy to see why Dr. Henry Kissinger called this work "one of the definitive histories of the period." Schlesinger's shrewd observations and sharp wit have long helped Americans understand who they are and where they've come from. Now his own story comes to life with a lucid, often humorous narration by Nelson Runger.

“His book, like Mr. Schlesinger himself, wears a bowtie. It is the competent, neat and natty work of an accomplished and contented man.”  —New York Times
“A historian’s dance to the music of time.”  —Time
“[An] engaging and sophisticated volume.”  —Publishers Weekly
“A fascinating and generous account of a life tuned to the music of history.”  —Kirkus Reviews
“A major book for readers of history and current events.”  —Booklist