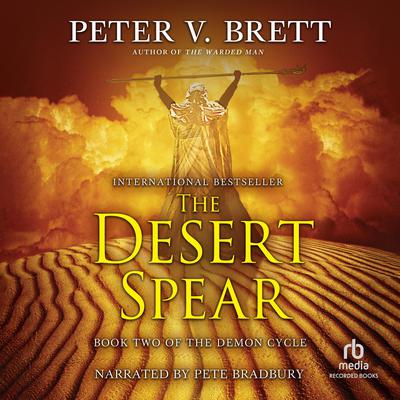 Peter Brett's The Desert Spear continues the post-apocalyptic adventure he began in his highly acclaimed debut, The Warded Man. The world remains under siege by demonkind stalking the land when the sun goes down. But a new hero has risen from the desert. Claiming to be the mythical Deliverer, Ahmann Jardir now rides alongside the allied desert tribes of Krasia. Jardir and his fellows are on an epic quest to vanquish the demons plaguing the world and bring humanity back from the brink of extinction.

“In keeping with the recent trend of starting in the thick of the action, this sequel to 2009’s The Warded Man picks up in the heat of Jardir’s conquest of the greenlands…Sure to leave fans on tenterhooks waiting for the last installment.” —Publishers Weekly
“The sequel to Brett’s acclaimed debut, The Warded Man, extends the author’s panoramic vision of a world steeped in the traditions of the desert and rich in magic both good and evil. Fans of epic fantasy in the tradition of Robert Jordan and George R. R. Martin will enjoy the arrival of a strong voice in multivolume epic fantasy.” —Library Journal
“The gripping sequel to The Warded Man…emphasizes political and romantic intrigue without losing the urgency of the demon war.” —Booklist
“The most significant and cinematic fantasy epic since The Lord of the Rings. Inspired, compelling, and totally addictive!”  —Paul W. S. Anderson, director of Resident Evil: Afterlife

Peter Brett is a New York Times bestselling fantasy author. He received his BA in English from the University of Buffalo and worked in medical publishing before becoming a full-time writer. He is most known for his Demon Cycle books, which has sold over two and a half million copies in twenty-five languages worldwide. He has also written standalone novels and novellas, including Tibbett’s Brook and Brayan’s Gold. Brett lives in Manhattan with his wife and daughter.