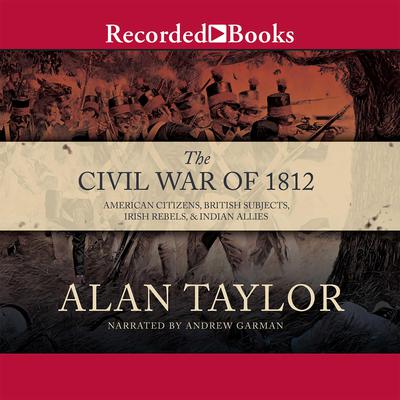 Pulitzer Prize-winning historian Alan Taylor tells the riveting story of a war that redefined North America. In a world of double identities, slippery allegiances, and porous borders, the leaders of the American Republic and the British Empire struggled to control their own diverse peoples. Taylor's vivid narrative of an often brutal- sometimes farcical-war reveals much about the tangled origins of the United States and Canada.

“Easily the most sophisticated book ever written about a conflict that is often either neglected or seriously misunderstood…Taylor’s discussions of diplomatic and political maneuvering are woven with military set-pieces into a powerful narrative…[This] book affirms his gifts for prodigious research.” —Wall Street Journal
“Remarkable and deeply researched…Taylor masterfully captures the strangeness of this war.” —New York Review of Books
“In this deeply researched and clearly written book, [Taylor] tells the riveting story of a war that redefined North America.” —Washington Times
“Credit Taylor with blowing most of the dust off America’s most forgotten war. This is history with a capital H.” —Seattle Times
“Comprehensive…Taylor’s account of a land war that roughly divided people with a common culture and heritage provides a new dimension for an understanding of 1812.” —Boston Globe
“A truly spellbinding narrative. Unlike other books on the War of 1812, [Taylor’s] is about the hearts and minds of the people who planned it, fought it and lived through it. Almost every page brings a revelation.” —Toronto Star
“An impressively accessible history…A perceptively nuanced take on a war often forgotten or misunderstood…Taylor offers persuasive arguments, a lively narrative.” —Richmond Times Dispatch
“Pulitzer Prize–winning historian Taylor…presents the War of 1812 not as the conventionally understood second war for independence, but as a civil war waged in the context of a US-Canadian boundary barely separating kindred peoples, recently and incompletely divided by the revolution.” —Publishers Weekly
“Thoroughly researched…Taylor illuminates an arena generally omitted from military histories of the war. Battles and campaigns do connect his account, however, which will stand history collections in good stead for a very long while.” —Booklist