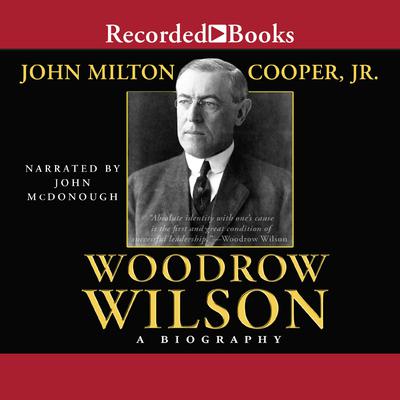 A 2010 Pulitzer Prize Finalist for Biography/Autobiography

John Milton Cooper, Jr., is widely acknowledged as one of the world's preeminent Woodrow Wilson biographers. This thoroughly researched one-volume profile of America's 28th president is universally hailed for its scholarship and insight into the life and career of one of the nation's most polarizing leaders. "A rich and thoughtful portrait of a transformative, controversial and resonant president."-Jon Meacham, Pulitzer Prize-winning author

“A rich and thoughtful portrait of a transformative, controversial and resonant president.” —Jon Meacham, Pulitzer Prize–winning and New York Times bestselling author of American Lion
“An admiring and engaging work of presidential revisionism…A powerful, deeply researched and highly readable case for keeping Wilson in the top ranks of American presidents.” —New York Times Book Review
“[Woodrow Wilson] is deeply, indeed exhaustively researched, and beautifully, often movingly narrated. It is far and away the best biography of the twenty-eighth president we have and as such it is unlikely to be surpassed.”  —Boston Globe
“Wilson comes alive in Cooper’s insightful and important biography…It’s easy to see why Wilson captures many imaginations. We still want to believe what Wilson believed: that there is a common right, that we can find it, and that it matters most of all.” —Newsweek
“Cooper clearly admires his subject but is not blind to his faults.” —Cleveland Plain Dealer
“Cooper exhibits complete command of his materials, a sure knowledge of the man, and a nuanced understanding of a presidency almost Shakespearean in its dimensions.” —Kirkus Reviews

John Milton Cooper Jr. is professor of history at the University of Wisconsin. He is the author of Breaking the Heart of the World: Wilson and the Fight for the League of Nations and The Warrior and the Priest: Woodrow Wilson and Theodore Roosevelt, among others. He has been a fellow at the Woodrow Wilson International Center for Scholars in Washington, DC, and currently lives in Madison, Wisconsin.