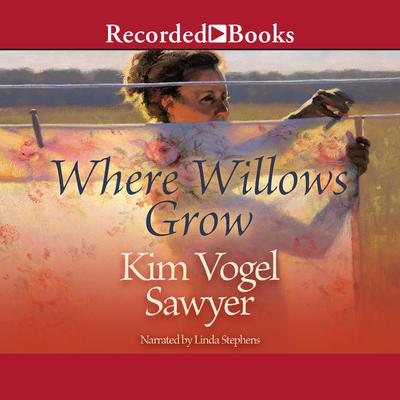 CBA best-selling author Kim Vogel Sawyer captivated millions with her emotionally moving gem Waiting for Summer's Return-a CBD Top-Twenty Fiction. Set in 1936 Kansas, Where Willows Grow transports listeners to America's drought-stricken heartland as the hopes and dreams of hardworking farmers blow away with the wind. As pregnant Anna Mae and her husband Harley struggle to feed their growing family, Harley travels 100 miles to build a WPA monument. But Anna Mae grows increasingly desperate as months drag on with no word from her husband.

“Stephens's rich vocal personality and deft narration dramatize a family's struggles with economic hardship as they fight to hang on to their property. Her energetic, textured characterizations reveal the abiding endurance that defines these characters and the historical period they live in.” —AudioFile
“This book has Kim Sawyer's signature depth of characterization. As the reader, I quickly fell in love with Anna and her struggles. The characters were rich and diverse…I also love the way Kim makes the setting come alive. She pulls together unknown pieces of Kansas history that add richness and depth to the plot. I also enjoyed the fact that this book was set during the Depression. This has been a time period that has been overlooked by many historical authors, yet Kim makes it come to life in a manner that kept me engaged from page one.” —christianbookreviews.com
“As a mother I could really relate to Anna's anguish as she worried for her children. As a wife I could relate to the realistic portrayal of the woman left to hold house and home together.” —armchairinterviews.com
“I really enjoyed reading Where Willows Grow, and could not put it down until I had completed it. I could totally understand the desperation for survival during those horrible times of no rain in Kansas, with the dust just blowing and blowing…I would recommend this book to anyone who is interested in a little bit of Kansas history and for a touching story. I wanted Where Willows Grow to go on further so I could see what would happen next, and I was disappointed when the book ended.” —readerviews.com
“A poignant story of a woman left to hold house and home together; I was absorbed from the opening scenes. The trials and tribulations of this small family are emotional and realistically portrayed by the author. I was hard-pressed to keep a dry eye while reading Anna's story. Well researched, the sense of time and place was vividly rendered and allows the reader to taste the despair suffered by Anna. Where Willows Grow is a fine example of our heartland during the Depression and drought.” —romancedesigns.com

Kim Vogel Sawyer is a bestselling and award-winning author and speaker. She is the author of more than twenty inspirational novels. Her books have won the Carol Award, the Gayle Wilson Award of Excellence, and the Inspirational Reader’s Choice Award. A former elementary school teacher, she now lives with her husband, Tom, in central Kansas.