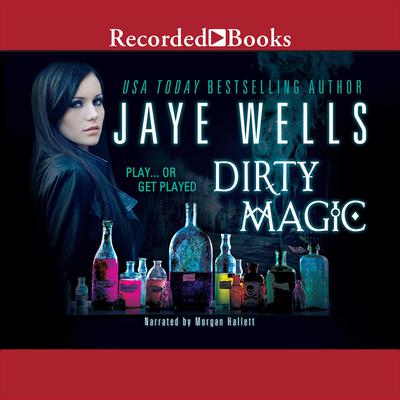 The last thing patrol cop Kate Prospero expected to find on her nightly rounds was a werewolf covered in the blood of his latest victim. But then, she also didn't expect that shooting him would land her in the crosshairs of a Magic Enforcement Agency task force, who wants to know why she killed their lead snitch. The more Prospero learns about the dangerous new potion the MEA is investigating, the more she's convinced that earning a spot on their task force is the career break she's been wanting. But getting the assignment proves much easier than solving the case. Especially once the investigation reveals their lead suspect is the man she walked away from ten years earlier-on the same day she swore she'd never use dirty magic again. Kate Prospero's about to learn the hard way that crossing a wizard will always get you burned, and that when it comes to magic, you should never say never. "Kate Prospero is my new favorite heroine-imperfect, haunted, driven, and dangerous." (New York Times bestseller Kevin Hearne) "Jaye Wells raises the urban fantasy bar with DIRTY MAGIC, a hard-boiled series debut as unique and surprising as the creatures and characters peopling it. Kate Prospero is charged with policing the Cauldron, a magical world so fully realized, and so gritty, it gets under your nails. Wells is known for deftly weaving non-stop action with no-holds barred humor, but the unique and deeply drawn relationships are the real alchemy here. DIRTY MAGIC showcases seasoned pro, Wells, at the top of her game, and establishes newcomer Kate Prospero as the urban fantasy heroine to beat." (New York Times Bestseller Vicki Pettersson) "A fast-paced fun book" (New York Times bestselling author Charlaine Harris on Red-Headed Stepchild) "Last year, I wrote that Jaye Wells had the potential to be the next coming of Laurell K. Hamilton and Kim Harrison. This year, I'll amend that slightly: Jaye Wells is the next coming of LKH and Kim Harrison." (www.bn.com on Green-Eyed Demon)

Jaye Wells originally embarked on a series of random career paths, including stints working for a motivational speaker and at an art museum. After several years as a magazine editor and freelance writer, she finally decided to leave the facts behind and make up her own reality. Her overactive imagination and life-long fascination with the arcane and freakish blended nicely with this new career path. Her Sabrina Kane urban fantasy series is a blend of dark themes, grave stakes, and wicked humor. She lives in Texas with her family.