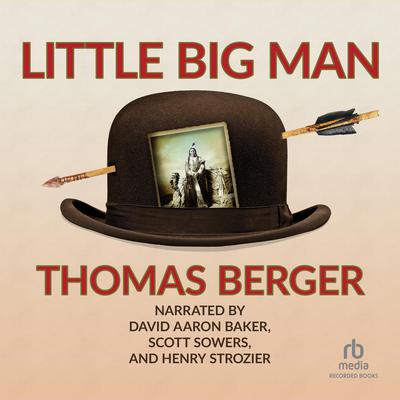 The story of Jack Crabbe, raised by both a white man and a Cheyenne chief. As a Cheyenne, Jack ate dog, had four wives and saw his people butchered by General Custer's soldiers. As a white man, he participated in the slaughter of the buffalo and tangled with Wyatt Earp. From the Trade Paperback edition.

“An epic such as Mark Twain might have given us.” —Henry Miller, New York Times bestselling author
“Spellbinding…[Crabb] surely must be one of the most delightfully absurd fictional fossils ever unearthed.” —Time
“Superb…Berger’s success in capturing the points of view and emotional atmosphere of a vanished era is uncanny. His skill in characterization, his narrative power and his somewhat cynical humor are all outstanding.” —New York Times
“The very best novel ever about the American West.” —New York Times Book Review
“This audio achievement begins with narrator David Aaron Baker portraying writer Ralph Fielding Snell, who is about to interview a man who claims he participated in the Battle of the Little Big Horn. Scott Sowers then narrates the bulk of the story as 111-year-old Jack Crabb. Sowers’ even pace and gritty voice makes the old-timer’s amazing, slang-filled story vibrantly clear. Sowers perfectly captures Crabb’s mercurial disposition and compellingly recounts his many adventures—as a Cheyenne warrior, white man, drunk, merchant, gambler, miner, mule driver, gunslinger, soldier, and more. Henry Strozier reads the essay by Larry McMurtry at the end in a deep, comfortable voice that offers listeners a chance to reflect on the significance of this American classic. Winner of AudioFile Earphones Award.” —AudioFile

Thomas Berger (1924–2014) wrote more than twenty novels in his lifetime, including Regiment of Women, Neighbors, and The Feud, which was nominated for a Pulitzer Prize. His novel Little Big Man is known throughout the world.

Larry McMurtry (1936–2021) was an award-winning novelist, essayist, screenwriter, and avid book collector. His novels include The Last Picture Show, Terms of Endearment, and Lonesome Dove, for which he won the Pulitzer Prize. He wrote more than thirty screenplays, including the coauthorship of Brokeback Mountain, for which he received an Academy Award.