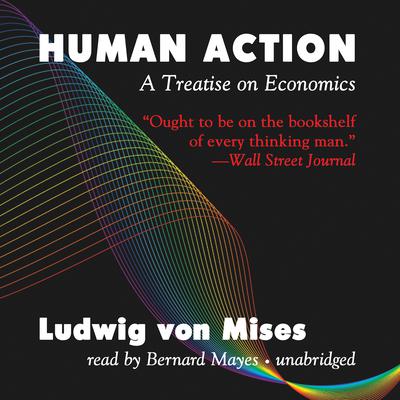 Ludwig von Mises is to economics what Albert Einstein is to physics, and Human Action is his greatest work. It is a systematic study that covers every major topic in the science of economics. It is also one of the most convincing indictments of socialism and statism ever penned. When it first appeared in English in 1949, it was a sensation, the largest and most scientific defense of human freedom ever published, igniting an eruption of critical acclaim. For instance, Rose Wilder Lane wrote, “I think Human Action is unquestionably the most powerful product of the human mind in our time, and I believe it will change human life for the better during the coming centuries as profoundly as Marxism has changed all of our lives for the worse in this century.” Henry Hazlitt wrote, “It should become the leading text of anyone who believes in freedom, in individualism and in a free market economy.” The acclaim has not ceased, and the book is universally recognized as a classic in the field of modern economics.

“[Human Action] should become the leading text of everyone who believes in freedom, in individualism, and in the ability of a free-market economy not only to outdistance any government-planned system in the production of goods and services for the masses, but to promote and safeguard…those intellectual, cultural, and moral values upon which all civilization ultimately rests.” —Newsweek
“Every now and then a book comes along that both sums up and extends the collected wisdom of some science. Human Action, by Ludwig von Mises, was such a book. Fifty years after it first came out, it is still one of the classics of economics...[and] still speak[s] to the vital debates of the day.” —Investor's Business Daily
“This is Ludwig von Mises’ magnum opus, the magisterial contribution in which he develops his flagrantly controversial philosophy of the social sciences, his brilliant entrepreneurial theory of the market process, and his devastatingly consistent classical liberal perspective on political economy, into an overarching system of extraordinarily impressive scope. Human Action is a work that has, for almost half a century, retained its freshness and its relevance…Recent developments in the economics profession suggest that the most far-reaching impact upon economic thought exerted by this celebrated work may be that still to come.” —Israel M. Kirzner, New York University, author of Competition and Entrepreneurship
“Human Action says it all. In this towering masterwork, Mises makes the case for limited government and a free society, pointing out the inseparability between freedom and free enterprise—that you can’t have one without the other.” —William H. Peterson, adjunct scholar, Heritage Foundation

Ludwig von Mises (1881–1973) earned his doctorate in law and economics from the University of Vienna in 1906. In 1926, Mises founded the Austrian Institute for Business Cycle Research. From 1909 to 1934, he was an economist for the Vienna Chamber of Commerce. Before the Anschluss, in 1934 Mises left for Geneva, where he was a professor at the Graduate Institute of International Studies until 1940, when he emigrated to New York City. From 1948 to 1969, he was a visiting professor at New York University.