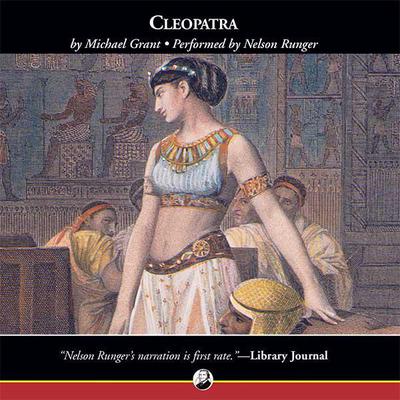 Acclaimed historian Michael Grant pieces together the life of one of the most beguiling, fascinating, yet least understood rulers of antiquity-Cleopatra. A story of triumph and tragedy, this stunning biography provides a captivating glimpse at the woman behind the legend. Here is the Cleopatra who became the queen of Egypt without a drop of Egyptian blood in her veins. Almost entirely of Greek heritage, she proved herself to be a skilled, ambitious, and practical politician. She sought to return Greece to its former glory through political liaisons with Julius Caesar and Mark Antony. Breathtaking in scope, Cleopatra paints a dazzling portrait of one of history's great rulers. Perfectly narrated by Nelson Runger, Grant's lucid prose recaptures the grandeur and struggle of Cleopatra's Egypt, and rewards the listener with a studied and enthralling look at the monarch behind the veil of mystery that surrounds her.