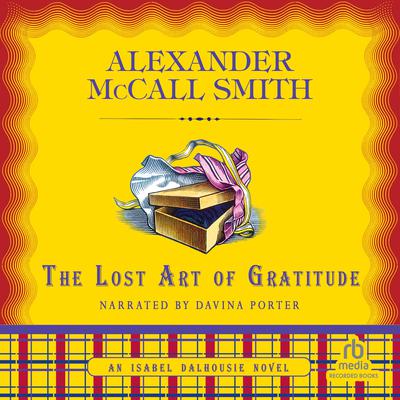 The Lost Art of Gratitude

New York Times best-selling author Alexander McCall Smith crafts the sixth entertaining novel starring the ever ethical Isabel Dalhousie. The sensational sixth installment in the best-selling chronicles of the irrepressibly curious Isabel Dalhousie finds our inquisitive heroine and new mother racing two very troublesome people from her past. Isabel's son, Charlie, is only eighteen months, but his social life is already kicking into high gear, and it's at a birthday party, where Isabel is approached by Minty Auchterlonie, an old adversary and now a high-flying financier. Minty, it seems, is having trouble in her personal life, and seeks Isabel's help. To make matters worse, the anything but peaceable Professor Dove has accused Isabel's journal of plagiarism. There is also the ever-pressing question of the future of her relationship with Jamie. As always, she makes her way toward the heart of each problem by philosophizing, sleuthing, and downright snooping as only she can