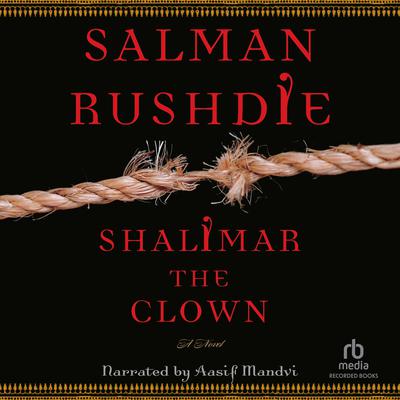 Longlisted for the 2005 Man Booker Prize

This is the story of Maximilian Ophuls, America's counterterrorism chief, one of the makers of the modern world; his Kashmiri Muslim driver and subsequent killer, a mysterious figure who calls himself Shalimar the clown; Max's illegitimate daughter India; and a woman who links them, whose revelation finally explains them all. It is an epic narrative that moves from California to Kashmir, France, and England, and back to California again. Along the way there are tales of princesses lured from their homes by demons, legends of kings forced to defend their kingdoms against evil. And there is always love, gained and lost, uncommonly beautiful and mortally dangerous.

“Brilliantly invented…Shalimar the Clown is a powerful parable about the willing and unwilling subversion of multiculturalism.” —William T. Vollman, National Book Award–winning author of Europe Central
“[Rushdie’s] novels pour by in a sparkling, voracious onrush, each wave topped with foam, each paragraph luxurious and delicious.” —New Yorker
“To inhale Salman Rushdie’s richly textured, exotic prose is to realize the insipid nature of most contemporary fiction…Genius…A master of the global novel.” —USA Today
“Rushdie’s most engaging book since Midnight’s Children. It is a lament. It is a revenge story. It is a love story. And it is a warning.” —Observer (London)
“While readers might stumble over the Kashmiri, Indian, and Pakistani names and accents, Mandvi glides right through them, allowing us to engage with Rushdie’s well-wrought characters and sagas. Mandvi has a calm, quiet storyteller voice…leaving us to relish the sounds and images and rhythms of Rushdie’s language.” —Publishers Weekly (starred review)
“To characterize the novel as ‘rich’ seems inadequately broad as…a cogent descriptor of Rushdie’s sheer and magnificent talent. His beautifully metaphoric language and sly sense of humor keep his complex plot, with its layers of personal and cosmic meaning, tightly woven.” —Booklist
“Vintage Rushdie…A magical-realist masterpiece that equals, and arguably surpasses, the achievements of Midnight’s Children, Shame, and The Moor’s Last Sigh. The Swedes won’t dare to offend Islam by giving Rushie the Nobel Prize he deserves more than any other living writer. Injustice rules.” —Kirkus Reviews (starred review)

Sir Salman Rushdie is the author of many novels, including Grimus, Midnight’s Children, Shame, The Satanic Verses, The Moor’s Last Sigh, The Ground beneath Her Feet, Fury, Shalimar the Clown, and The Enchantress of Florence. He has also published works of nonfiction, including The Jaguar Smile, Imaginary Homelands, The Wizard of Oz, and, as coeditor, The Vintage Book of Short Stories. He has received many awards for his writing and is a fellow of the Royal Society of Literature and Commandeur des Arts et des Lettres. In 1993 Midnight’s Children was judged to be the “Booker of Bookers,” the best novel to have won the Booker Prize in its first twenty-five years. In June 2007 he received a knighthood in the Queen’s Birthday Honours.