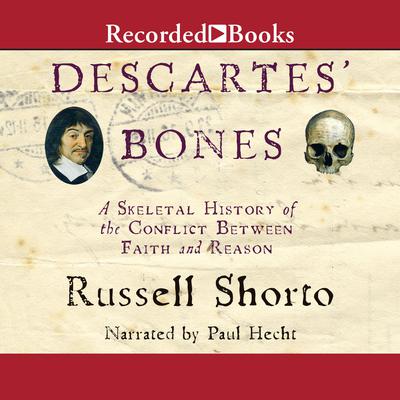 Descartes' Bones: A Skeletal History of the Conflict between Faith and Reason

From bestselling, prize-winning author Russell Shorto comes a grand and strange history of the on-going debate between religion and science-seen through the oddly momentous journey of the skull and bones of the great French philosopher Rene Descartes. In this book Shorto brilliantly shows how this argument first started with Descartes and how his ideas (and bones) have remained central to this theoretical struggle for over 350 years. On a brutal winter's day in 1650 in Stockholm, Frenchman Rene Descartes, the most influential and controversial thinker of his time, was buried after a cold and lonely death far from home. Sixteen years later, the pious French Ambassador Hugues de Terlon secretly unearthed Descartes' bones and transported them to France. Why would this devoutly Catholic official care so much about the remains of a philosopher who was hounded from country after country on charges of atheism? Why would Descartes' bones take such a strange, serpentine path over the next 350 years-a path intersecting some of the grandest events imaginable: the birth of science, the rise of democracy, the mind-body problem, the conflict between faith and reason? The answer lies in Descartes' famous phrase: cogito ergo sum. "I think therefore I am." This quote from his work Discourse on the Method, destroyed 2,000 years of received wisdom by introducing an attitude of human skepticism towards ideas of medicine, nature, politics and society. The notion that one could look to provable facts, and not rely on the Church's teachings and tradition, was one of the most influential ideas in human history, ultimately creating the scientific method and overthrowing religion as prevailing truth. Descartes' Bones is a fascinating narrative-both macro and micro history in one-that twists and turns up to the present day.

“Many strains of thought converge around Descartes and his physical remains…Mr. Shorto has used them as the basis of an investigative book...[that] attest to Mr. Shorto’s intellectual adventurousness and dogged curiosity....Mr. Shorto leaps from one intriguing topic to another, doing it with verve... His insights are keen. And he is as drawn to great, overarching ideas as he is to historical factoids. Descartes’ posthumous journey happens to be rich with both.”  —New York Times
“[A] smart, elegantly writtenfeat of intellectual of intellectual story-telling.”  —New York Times Book Review
“Giving rein to his curiosity about the postmortem Descartes, Shorto will pull in readers who enjoy a good history mystery seasoned with philosophical thoughts.”  —Booklist
“Learning lightly worn but hard won; would that all philosophical history were so accessible.” —Kirkus Reviews