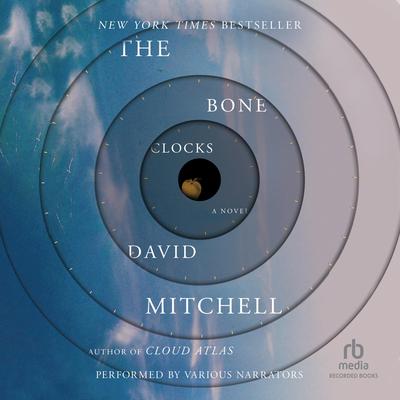 Nominated for the 2015 Audie Award for Literary Fiction

An AudioFile Best Book of the Year for 2014

One of BookPage Top Pick of September 2014

David Mitchell is an eloquent conjurer of interconnected tales, a genre-bending daredevil, and a master prose stylist. His hypnotic new novel, The Bone Clocks, crackles with invention and wit-it is fiction at its most spellbinding and memorable. Following a scalding row with her mother, fifteen-year-old Holly Sykes slams the door on her old life. But Holly is no typical teenage runaway: A sensitive child once contacted by voices she knew only as "the radio people," Holly is a lightning rod for psychic phenomena. Now, as she wanders deeper into the English countryside, visions and coincidences reorder her reality until they assume the aura of a nightmare brought to life. For Holly has caught the attention of a cabal of dangerous mystics-and their enemies. But her lost weekend is merely the prelude to a shocking disappearance that leaves her family irrevocably scarred. This unsolved mystery will echo through every decade of Holly's life, affecting all the people Holly loves-even the ones who are not yet born. A Cambridge scholarship boy grooming himself for wealth and influence, a conflicted father who feels alive only while reporting from occupied Iraq, a middle-aged writer mourning his exile from the bestseller list-all have a part to play in this surreal, invisible war on the margins of our world. From the medieval Swiss Alps to the nineteenth-century Australian bush, from a hotel in Shanghai to a Manhattan townhouse in the near future, their stories come together in moments of everyday grace and extraordinary wonder. Rich with character and realms of possibility, The Bone Clocks is a kaleidoscopic novel that begs to be taken apart and put back together. From the Hardcover edition.

“Dazzling…Mitchell’s heavy arsenal of talents is showcased in these pages: his symphonic imagination; his ventriloquist’s ability to channel the voices of myriad characters from different time zones and cultures; his intuitive understanding of children and knack for capturing their solemnity and humor; and his ear for language—its rhythms, sounds and inflections.” —New York Times
“Astonishing…No one, clearly, has ever told Mitchell that the novel is dead. He writes with a furious intensity and slapped-awake vitality, with a delight in language and all the rabbit holes of experience…In his sixth novel, he’s brought together the time-capsule density of his eyes-wide-open adventure in traditional realism with the death-defying ambitions of Cloud Atlas until all borders between pubby England and the machinations of the undead begin to blur…He clearly believes not just in words, alternate realities, burps of synchronicity, but in the excitement of thinking about belief and extending its borders without losing the clank of the real…Not many novelists could take on plausible Aboriginal speech, imagine a world after climate change has ravaged it and wonder whether whales suffer from unrequited love…Very few [writers] excite the reader about both the visceral world and the visionary one as Mitchell does.” —New York Times Book Review
“[The Bone Clocks] has finally descended incarnate from the mind of this divinely inventive author…A rich selection of domestic realism, gothic fantasy and apocalyptic speculation…another example of Mitchell’s boundless dexterity.” —Washington Post
“With The Bone Clocks, [David] Mitchell rises to meet and match the legacy of Cloud Atlas.” —Los Angeles Times
“David Mitchell is one of the most electric writers alive. To open a Mitchell book is to set forth on an adventure…In his latest novel, The Bone Clocks, Mitchell has spun his most far-flung tale yet…Strange and magical.” —Boston Globe
“David Mitchell is a superb storyteller…One of the reasons he is such a popular and critically lauded writer is that he combines both the giddy, freewheeling ceaselessness of the pure storyteller with the grounded realism of the humanist. There’s something for everyone, traditionalist or postmodernist, realist or fantasist.” —New Yorker
“A hell of a great read…wild, funny, terrifying…a slipstream masterpiece all its own…David Mitchell is a genre-bending, time-leaping, world-traveling, puzzle-making, literary magician, and The Bone Clocks is one of his best books.” —Esquire
“Transportingly great…If David Mitchell isn’t the most talented novelist of his generation, is there any doubt that he is the most multi-talented? He is, at his best, a superior writer to Jonathan Franzen, a better storyteller than Michael Chabon, more wickedly clever than Jennifer Egan, nearly as fluent as Junot Díaz in multiple dialects, and as gifted as Alice Munro…The Bone Clocks affords its readers the singular gift of reading—the wish to stay put and to be nowhere else but here.” —Atlantic
“[A] multivoiced, harmonically layered narrative symphony…Plot summaries are a far too simplistic device for talking about this novel. It is neither coming-of-age story nor dystopian fiction; nor is it fantasy, contemporary satire, nor high-concept adventure thriller, though it surely has elements of all of those and more…This novel will be one of the most talked-about books of the year, as well it should be; it’s a triumph on every one of its many levels.” —Booklist (starred review)
“Mitchell uses nonlinear leaps through time and reality, and listeners benefit from the spot-on performances of six talented narrators…All six actors do a remarkable job…Fascinating listening.” —AudioFile