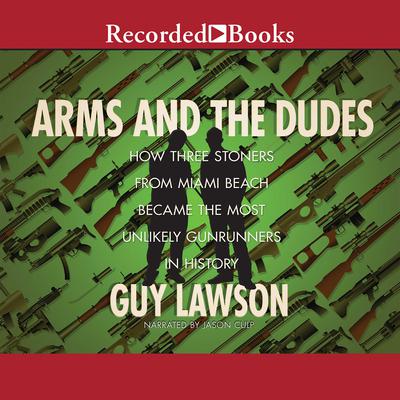 Arms and the Dudes: How Three Stoners from Miami Beach Became the Most Unlikely Gunrunners in History

The page-turning, inside account of how two kids from Florida became big-time weapons traders-and how the US government turned on them. In January of 2007, two young stoners from Miami Beach-one a ninth grade dropout, the other a licensed masseur-won a $300 million Department of Defense contract to supply ammunition to the Afghanistan military. Incredibly, instead of fulfilling the order with high-quality arms, Efraim Diveroli and David Packouz-the dudes-bought cheap Communist-style surplus ammunition from Balkan gunrunners. The pair then secretly repackaged millions of rounds of shoddy Chinese ammunition and shipped it to Kabul-until they were caught by Pentagon investigators and the scandal turned up on the front page of The New York Times. That's the "official" story. The truth is far more explosive. For the first time, journalist Guy Lawson tells the thrilling true tale. It's a trip that goes from a dive apartment in Miami Beach to mountain caves in Albania, the corridors of power in Washington, and the frontlines of Iraq and Afghanistan. Lawson's account includes a shady Swiss gunrunner, Russian arms dealers, corrupt Albanian gangsters, and a Pentagon investigation that impeded America's war efforts in Afghanistan. Lawson exposes the mysterious and murky world of global arms dealing, showing how the American military came to use private contractors like Diveroli and Packouz as middlemen to secure weapons from illegal arms dealers-the same men who sell guns to dictators, warlords, and drug traffickers.

“Lawson’s eye for detail and extensive research are commendable.” —Publishers Weekly
“An eye-opener and an excellent job of reporting and writing.” —Kirkus Reviews

Guy Lawson is an award-winning investigative journalist whose articles on war, crime, culture, and law have appeared in the New York Times Magazine, Rolling Stone, GQ, Harper’s magazine, and many other publications.